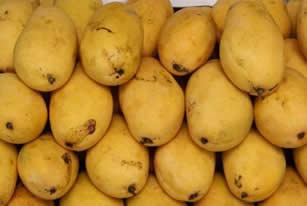 Carabao mango’s distinct succulent taste puts the country on the international map as having the world’s best mango. If foreigners are asked on what makes their visit to the Philippines memorable, they would only blurt out one word: mangoes.

Buyers abroad do not mind shelling off additional bucks for Philippine mango which is often priced higher than its foreign counterparts. The fruit’s popularity is so immense that other countries have labelled some of their mangoes “Manila mango” just to attract consumers. The crop’s clout as a top tourist drawer is truly undisputed as foreigners from Singapore to Europe would flock the country only to get a taste of this delectable fruit treat.
Without a doubt, fruit connoisseurs from all over the world consider Philippine mango as one of the finest fruit in the world. But for the Filipinos, it is more than being a national fruit— it is a national pride and the backbone of the agricultural economy.

Industry overview
The Philippines ranks sixth among the world’s top mango producers after China, Pakistan, Brazil, Mexico and India. It accounts 3.5 per cent share of total global output, producing one million tonnes a year on the high side and about 650,000 to 700,000 tonnes in low season.  About 73 per cent of the total area planted to mangoes is owned by small farmers while 24 per cent operate farm sizes between 3 to 9.99 hectares. Those operating 10 hectares and above constitute only about 3 per cent. About 95 per cent of production is consumed locally while about a quarter of total production is processed into various product forms. The crop contributes an average of PHP12.5 billion and supports 2.5 million farmers.
Government statistics show that in 2009, exports reached 20,824 tonnes of fresh mangoes valued at US$19.53 million while dried mango exports reached 1,028 tonnes worth US$7.4 million. Processed mango exports totalled 11,334 tonnes valued at US$13.86 million. Philippine mangoes are exported to the US, Asian and European markets, with Japan and Hong Kong absorbing 90 per cent of the shipments.
From January to September of this year, data from the Bureau of Agricultural Statistics (BAS) show that mango came back from its negative growth rate last year with a 7.63 per cent output gain at 790,560 tonnes as against 734,490 tonnes in 2009. This was due to prevailing weather conditions which proved to be advantageous to flower induction activities in the regions of Cagayan Valley, Central Luzon, MIMAROPA (Occidental Mindoro, Oriental Mindoro, Marinduque, Romblon and Palawan). BAS also noted that continuous flower induction activities were also reported in CALABARZON (Cavite, Laguna, Batangas, Rizal and Quezon). The agency estimates an increase in production by the end of 2010.
According to the Mindanao Regional Board of Investments (RBOI), about a quarter of the total mango production is processed and this continues to grow relative to the fresh category. The mango-processing sector produces various forms of mango such as mango puree, mango juice, dried mangoes, mango concentrates, frozen mangoes, mango glaze, edible parts, mango in brine and mango preserves. San Miguel Corporation and RFM Incorporated dominates the mango juice sector while the Board of Investments lists more than 20 firms joining the mango juice bandwagon. RBOI also said mango juice concentrates from 1995-2004 have increased by 1600 per cent per year while other processed products also posted bullish growth rates: dried mango (25 per cent) and mango puree (45 per cent). For this reason, fruit conglomerates such as Lapanday Foods Corporation and Dole have invested in mango production in recent years and have expanded their area.
To make mangoes more competitive in the international market, the Department of Agriculture has invested in postharvest facilities such as heat water treatment and vapour heat treatment to arrest the development diseases. The DA says these postproduction methods have helped penetrate hard-to-crack markets like Japan and US as mangoes are easily perishable. With these facilities, the shelf-life of mangoes has been extended, thus, opening more opportunities to far flung areas such as Australia and Europe.

Sweet developments
Not only does it thrive in trade but mango has been on the spotlight for headlining a medical breakthrough. According to a study made by the National Mango Board of Orlando, Florida, mango extracts had "demonstrated some cancer-fighting ability when tested on lung, leukemia and prostate cancer cells." And when tested on breast and colon cancers, the mango compounds were found to have "even stronger anti-cancer abilities" scientists at the Texas A&M University found out. Although local health officials described the discovery as "very positive", they are hailing it as a ray of hope for cancer patients and good news for the country's mango industry. Former health secretary Esperanza Cabra cautions that between saying that on a molecular level certain substances found in mango can retard the growth of cancer cells to saying that it will prevent or cure cancer are "two different things." Still, she says there is a reason to eat mangoes daily since it contains antioxidants and essential nutrients such as potassium, copper and 17 amino acids. On the other hand, mango peels contain pigments that may have antioxidant properties, including carotenoids and polyphenols that may counteract against free radicals that cause diseases, including cancer.
Being a national symbol, mango has also been a tourist highlight as it has been recently been the banner product of an agricultural tour held at the province of Zambales early this year. Cesar Cruz of the Philippine Tours Operators Association says agricultural tours in Asia Pacific is slowly gaining interest and mango has been the best bet in their fruit picking tour, similar to those of grapes in Europe and apples in the United States. Zambales, being one of top tourist destinations, boast of extensive mango farms, hence, according to Cruz, makes the place the ideal site for agro-tourism, particularly for mango picking. During the tour, visitors also experienced hands-on farm harvesting and view demonstrations on propagation and processing mango products. The best part of the tour, Cruz says, is getting their fill of mangoes during the sightseeing as well as bringing home 3-year old mango seedlings (worth PHP150 or US$3.42 per bundle) and carabao mangoes (worth PHP50 or US$1.15 per kilo).
Indubitably, mango has already come a long way from a mere table fruit to a nationwide sensation. No wonder, the crop has been given the utmost priority by the DA through its High Value Commercial Crops programme. This programme adopts a major shift towards market-oriented production system to cushion the impact of sudden market changes in the international and local trade as well as address the gaps in the commodity marketing systems. For this reason, mango farmers, particularly the backyard sector who are having a hard time finding buyers for their mangoes due to poor infrastructure and remote location, will have an opportunity to access to more markets, hence, bigger business prospects. Of late, the Bureau of Plant Industry has listed new export markets such as Canada, Guam, Hawaii, the Netherlands, Middle East and South Korea.

Obstacles
Being a typhoon-prone country, food processors and exporters are expecting a decline in domestic mango production by a tenth this year due to damages caused by typhoon Juan (international name: Megi). According to Roberto Amores, president of Philippine Food Processors and Exporters Organization, mango production this year may plunge to 800,000 tonnes from 900,000 tonnes in 2009 and may even decline further to 700,000 tonnes by 2011.
He also lamented the rising cost of raw materials particularly sugar as well as the strengthening of peso which severely affected exporters. Amores projects a US$10 million loss in revenue due to undelivered demands from the mainstream market in the third quarter.
This sentiment is echoed by Justin Uy, president of ProFood International Corporation, saying the country is unable to meet the high demand for Philippine dried mangoes. According to Uy, while demand for mango is growing, the slow implementation of land reform decelerates the expansion area for mangoes. He added that even a 300-hectare mango plantation is only good for three-week production, thus, the need to speed up the further development of the mango industry. As dried mangoes are considered high-end products by foreign buyers, Uy is urging the government to extend the necessary infrastructure and policy to accelerate the competitiveness of the dried mango industry.
The RBOI reverberated Amores and Uy's remarks, stating that processors complain about the lack of mangoes as well as the lack of linkages between growers, suppliers, exporters, buyers which affected the mango's market potentials. It also cited high freight costs and inadequate facilities as primary problems in cracking more markets.
Be that as it may, both parties believe that Philippine mango will still be among the perennial crop winners and will remain as a country's pride.