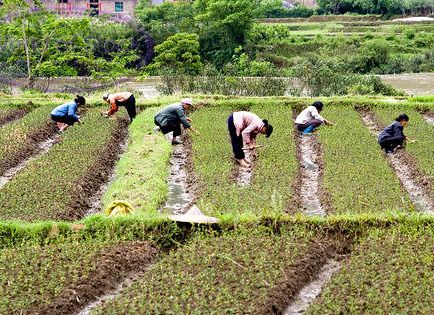 A number of threatened species in the developing world are entirely dependent on human agriculture for their survival, according to new research by the University of East Anglia (UEA).

Published recently in the journal Conservation Letters, the study concludes that many species, rather than just using farmland to supplement their natural habitat, would actually be driven to extinction without it. Species such as the White-shouldered Ibis in Cambodia, the Sociable Lapwing in Kazakhstan and the Liben Lark in Ethiopia rely on local people and their agriculture.
Greatest benefit comes from local communities practising traditional agriculture with low ecological impact. Valuable practices include grazing animals on land where rare species breed and feed, and growing cereal crops which provide a rich source of food.
“Conservation efforts in the developing world focus a lot of attention on forest species and pristine habitats – so people have usually been seen as a problem. But there are a number of threatened species – particularly birds but probably a whole range of wildlife – which heavily depend on the farmed environment,” said lead author Hugh Wright of UEA’s School of Environmental Sciences.
“Many of the traditional farming systems that benefit these species are now under threat both from industrial, large-scale agriculture and from more local economic development. We need to identify valuable farmland landscapes and support local people so that they can continue their traditional farming methods and help maintain this unique biodiversity.”
Conserving biodiversity by supporting or mimicking traditional farming methods has long been a feature in Europe, but it has rarely been applied in developing countries. The UEA researchers found at least 30 threatened or near threatened species relying on farmland in the developing world, but further research is likely to find many more.
Where local communities are threatened by industrial agriculture, which often results in people being thrown off their traditional lands, conservation may be able to provide a win-win solution, helping to safeguard farming livelihoods for local people and for wildlife. In other cases, local communities could receive economic or development benefits in return for continuing valuable farming practices that benefit wildlife. Conservation must not prevent development so any lost livelihood opportunities must be adequately compensated for.
“We have seen some of the poorest villagers denied access to their traditional grassland grazing and fishing lands, once these have been allocated to large businesses for intensive rice production,” said co-author Dr Paul Dolman.
“Although this helps produce food for export and helps the national economy, local people can suffer along with threatened birds which once nested in these grasslands. By identifying this link between people and threatened wildlife, we hope to help both.”