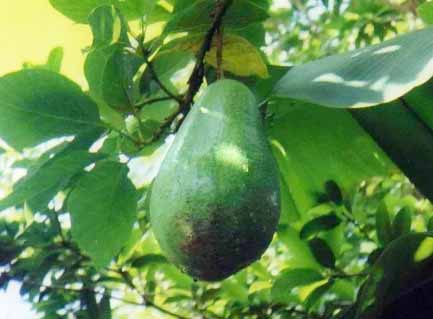 Avocado—which originated in Central America, particularly in high-elevation areas of Mexico and Guatemala—is now being produced commercially throughout the tropics and subtropics with Asian and Pacific Rim countries including India, Philippines, Vietnam, Malaysia and Australia and New Zealand becoming increasingly important producers.

Wherever grown, avocado is plagued by fungal pathogens infecting the leaves and fruit and one in particular called anthracnose caused by the fungus Colletotrichum gloeosporioides.

Avocado trees invariably grow in conditions conducive to the rapid spread and development of fungal diseases including anthracnose, while at the same time being subject to intense weathering pressure on fungicide deposits applied for season long protection. The dense tree canopies displayed by some avocado varieties aggravate disease development by prolonging high humidity levels, making the disease control more difficult to achieve.

Thick waxy deposits which cover the surface of avocado leaves and fruit mean only those fungicides showing good particle-plant surface adhesion and high tenacity in the face of heavy rainfall stand any chance of control. Particulate fixed copper fungicides, which are protectant in action, provide the best all-round option for the control of avocado anthracnose and other common diseases. Cuprous oxide is generally accepted as most efficacious of the fixed copper fungicides on a ‘gram for gram’ comparative basis.

Anthracnose disease of avocado has an extra dimension which makes control even more difficult to achieve. Infection (of the fruit) can take place at any time after fruit set, but major disease developments and damage do not show up until after-picking, during post-harvest storage, transit and marketing. This is due to the development of latent infections established weeks or months while the fruit was still on the tree. As such anthracnose of avocado has a ‘secret life’ lasting from fruit infection in the orchard until post-harvesting stage. The only way to block the ‘secret life’ of avocado anthracnose is to spray the trees with cuprous oxide by targeting the fruit and timing applications to cover the entire period of fruit susceptibility.

Anthracnose is the most widespread and serious disease affecting the leaves, flowers and fruit of avocado in the wet and humid tropics. Ability of the pathogen to infect a range of other fruit tree crops including mango just adds to the problem. Spores of the anthracnose fungus are spread in water and most avocado cultivars are susceptible.
Infection of avocado fruit by the anthracnose pathogen can occur at any time after fruit set with spores spread by rainfall, surface moisture as dew (condensation) and by over-head irrigation. The majority of spores originate from dead leaves trapped in canopy and infected fruit which have not fallen from the tree. Infection occurs with the spore germinating on the surface of an avocado fruit to form a short germ tube with a spherical structure (appressorium) at the tip. What happens next depends largely on whether the fruit skin is intact or damaged in some way.

Pre-harvest anthracnose occurs mainly on fruit that has suffered mechanical or insect damage. Large diseased areas subsequently spread quickly across the fruit which will usually fall prematurely. The other form of pre-harvest anthracnose takes the form of small, dark and disfiguring spots which sometimes occur around the lenticels (natural openings) in the fruit skin.

On undamaged avocados, infections usually remain latent (completely quiescent) until the full mature fruit is harvested and starts to ripen. During the ripening period, a narrow infection peg emerges from under the appressorium to penetrate the skin, thus allowing the fungal pathogen to grow rapidly across and inside the fruit. Continued growth of the fungal pathogen inside the fruit kills the flesh cells leading to large black necrotic areas called anthracnose.

Reason for this period of latent infection is the presence of an antifungal chemical compound in the skin (peel) of immature and unripe avocadoes. As the avocado starts to ripen, this anti-fungal compound declines allowing the fungal pathogen to develop and the disease to spread. Fungicide application to trees in the orchard to prevent infection of leaves, blossoms and subsequently the young fruit is the only way to ensure that harvested fruit go into the post-harvest period free of latent anthracnose infections.

Influence of anthracnose clearly extends from the orchard and into the post-harvest period on fruit that were visibly free of disease at picking, the fruit deteriorating quickly as latent infections become active during the final climacteric phase of post-harvest ripening. Extensive brown patches cover the fruit surface and coalesce causing the pulp beneath to turn black. The rot moves on rapidly entering the seed with the skin becoming covered in fungal fruiting bodies with salmon pink-coloured spores during the final stage of infection. Disease development is affected by ambient temperature and humidity in storage but mostly by stage of fruit maturity, moving more quickly in older fruit. Diseased fruits are a total loss.

Copper fungicides offer avocado growers the best option for control of anthracnose while at the same time dealing with a host of other diseases including avocado scab (Sphaceloma perseae), black spot/cercospora fruit rot (Pseudocercospora purpurea) and stem end rots (Botryosphaeria sp, Phomopsis sp and Botryodiplodia sp) at the same time. The virtual insolubility of fixed copper compounds such as copper oxychloride, cupric hydroxide and cuprous oxide means they are naturally tenacious in the face of intense tropical weathering. Cuprous oxide is generally accepted as the most efficacious of these fixed copper compounds when on a gram for gram basis.

Particle size and size distribution
Particle size distribution is the secret to success of protectant fungicides such as cuprous oxide. The smaller the particles and the narrower their distribution the more effective is the product as a protectant fungicide. This is related to a whole series of sequential factors in the entire spray application process from rapid and uniform mixing in the spray tank, superior particle adhesion to plant surfaces and optimum copper ion (Cu2+) profiles, for long term protection and effective disease control, by securing the right balances between solubility, tenacity and redistribution of deposits.

Nordox 75WG, a water dispersible granule formulation of cuprous oxide with 75 per cent active copper and manufactured by Nordox of Norway, provides the perfect illustration. All particles are within a size range of 1 to 5 micron (µm), 80 per cent less than 2µm and 99 per cent less than 5µm. Decreasing particle size underpins the performance of protectant fungicides from the time the bag is opened until copper ions are released from the deposit and enter the fungal cell. Free flowing and non-dusty Nordox 75WG is easy and safe to mix in water. The formulation disperses rapidly and efficiently forming a uniform suspension in water that passes freely through the nozzle orifice without any blockage.

Tenacity and redistribution
The increased surface area to volume ratio of the smaller particles generates stronger surface forces. These in turn enhance particle to surface adhesion and maximise capacity of the deposit to stick to the plant surface (higher tenacity), especially in the face of high intensity weathering. High surface area of small particles optimises the solubility profile of the sparingly soluble cuprous oxide.

Plant exudates and rainfall containing dissolved carbon dioxide from the atmosphere combine to generate weak acids in surface films of water and a pH value of 5.5 to 6.5. Weak acid solutions dissolve small amounts of active Cu2+ from the cuprous oxide particles. These soluble and positively charged copper ions are absorbed by fungal spores during germination and kill the fungus before it can penetrate the plant surface.

With more particles (on a gram to gram basis) than other copper fungicide products, sprays of Nordox 75WG spread a higher density of high adhesion particles over the plant surface.  Spores are more likely to land directly on a particle or very close to one because inter-particle distances are reduced to a minimum.

High deposit tenacity and weathering resistance shown by Nordox 75WG ensures residues remain at fungicidally active levels between spray applications even during the wet season. Deposits are gradually eroded by weathering with gradual redistribution of fungicide over the surface of the same leaf or fruit and onto plant surfaces lower in the canopy, via rain splashes, drips and rivulets. The superior release and redistribution profiles of Cu2+ from Nordox 75WG is vital for protection of new foliage and fruit produced during spray intervals.

Weekly sprays at 1,000 l/ha, started when fruit became susceptible to anthracnose, showed Nordox 75WG to perform as well as traditionally used copper fungicides at approximately half the dosage rate on the ‘Hass’ variety of avocado in Mexico. Dosage rates for Nordox 75WG of 2.0 kg /ha gave 98 per cent and 100 per cent control of, respectively, anthracnose and scab up to 14 days after the final application. Further reductions in dosage to 1.5 kg/ha and 1.0 kg/ha gave slightly less control but the difference was not statistically significant.

Trials in New Zealand to control ripe rots (anthracnose and stem end rot) in ‘Hass’ avocado showed the value of Oleo Nordox 40 (an oil-based liquid product containing cuprous oxide) in a 9 spray programme starting at the pre-blossom period and lasting right up to harvest. By using a ‘Hydramist’ sprayer, to produce very small droplets, Oleo Nordox 40 matched control achieved by a traditionally used cupric hydroxide fungicide and with reduced rates of active copper.