Nutrients for oil palm: A question of balance 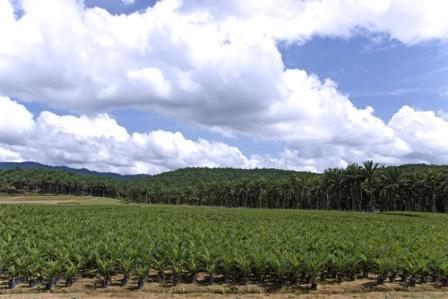 Adequate nutrition is essential during the growth and development stages of the oil palm since nutrient uptake establishes the plant’s production potential.

Every crop has essential nutrient requirements for proper growth and development and oil palm, in spite of its tough and robust appearance, is no exception. An insufficient amount of a specific nutrient will arrest growth, reduce yield and in acute circumstances cause deficiency symptoms. Plant nutrition is all about balance. A specific nutrient has to be supplied at a particular level, not only in its own right but also in relation to other nutrients. For instance, soils with an excess of iron may limit the availability of sulphur. Oil palm clearly requires more nitrogen than aluminium but if the aluminium becomes available in just moderate amounts, it will lead to phytotoxicity and crop damage.
The other aspect of balance relates to replenishment of nutrients lost from the soil by run off and leaching, but also through biomass removal during agronomic practices like leaf pruning and particularly harvesting of the fruit bunches. This avenue of nutrient loss can be kept to a minimum by recycling as much of the oil palm debris and tissue as possible. For instance, if shed male flowers and pruned old leaves are left on top of the soil they are quickly broken down and the nutrients within re-cycled.
Similarly, bunch stalks should be left behind at harvest, but removal of the fruits for processing eliminates a huge store of nutrients. That lost must be re-introduced into the oil palm ecosystem by measured fertiliser application based on requirements as determined by soil testing and foliar analysis.

Oil palm along with all other green plants has nutrient requirements as follows:
• Macronutrients – nitrogen (N), phosphorous (P), potassium (K). These three which are generally required in the greatest amounts are applied as ‘single source’ fertilisers (e.g. urea and calcium phosphate) or as NPK composites, the exact ratio of N, P and K depending on crop requirement as related to the stage of growth and development.
• Mesonutrients – sulphur (S), calcium (Ca), magnesium (Mg). These have been traditionally categorised as macronutrients. They are required in substantial amounts but nowhere near as large as N, P and K and therefore warrant a separate category.
• Micronutrients – iron (Fe), Zinc (Zn), Copper (Cu), Manganese (Mn), Aluminium (Al), Boron (B), Molybdenum (Mo), chlorine (Cl). Alternatively called trace elements because they are only required in the tiniest quantities.
Other soil-sourced elements which are not essential but may be beneficial are sodium (Na), silcon (Si) and cobalt (Co). Carbon and oxygen are derived from atmospheric carbon dioxide and hydrogen and more oxygen directly from the water molecule.

Nitrogen
Nitrogen, which mostly enters the plant as the soluble nitrate ion (NO3-) is a building block for tissue growth. Nitrogen is an integral part of every amino acid, and therefore plant proteins, and a core component of key molecules including chlorophyll and nucleic acids. Without nitrogen there is no growth and no yield. Deficiency in nitrogen first shows as a discolouration of young oil palm fronds, which lose their healthy dark green colour and turn yellow (chlorosis). As the deficiency takes hold, older leaves turn yellow as well and reduced growth and production become apparent. Deficiency in nitrogen is caused by a number of factors, which include:
• poor drainage and waterlogged soil,
• inherently infertile soils exhausted by previous agricultural activity,
• failure to properly establish leguminous cover crops (e.g Pueraria phaseoloides and Centrosema pubescens) which boost supplies through nitrogen fixation as well as preventing soil erosion and
• excessive competition from aggressive weeds like the grass Imperata cylindrica

If correction or alleviation of the above constraints has no effect, application of nitrogen fertiliser as urea or ammonium sulphate is required.

Potassium
Oil palm carries large quantities of potassium particularly in the stalks, fibres and shells and therefore correspondingly large amounts are removed at harvest. Potassium has crucial role in oil palm metabolism with a direct effect on the functioning of the chlorophyll molecule in photosynthesis. In addition, potassium ions control stomatal opening and therefore the controlled entry of carbon dioxide for photosynthesis and the controlled loss of water. For this reason, the potassium ion is commonly called the ‘gatekeeper’ and plays a key role in tolerance to drought and the effects of wilt disease caused by fungal pathogens such as Fusarium oxysporum var elaeidis. Potassium deficits show up quickly as loss of yield but severe shortfalls also cause deficiency in the leaves. These show first as a slight but perceptible loss of green leaf colour turning pale yellow with time or the development of orange coloured spots, which gradually coalesce. Symptoms appear on the lower and intermediate leaves and indicate a potassium content which has dipped below the critical level of 0.6 per cent. Cause of potassium deficiency is inadequate soil potassium concentration, a perpetual problem in tropical soils exhausted by continual cropping and leached by heavy rainfall. Supplementation with potassium fertiliser is the answer, but some soils are vulnerable to compaction at quite shallow depths from the addition of potassium as a single high dose.

Phosphorus
Phosphorus is a key component in many of biochemicals involved in respiration and nutrition (e.g. ATP – Adenosine triphosphate) and deficiencies therefore have a quick and fundamental effect on growth and yield. Phosphorus specifically promotes root development and is closely involved in the whole reproductive process including fertilisation, seed set and fruit development. Low soil availability is usually the cause of phosphorus deficiency, which can be corrected by applying a quick-acting fast-release fertiliser like triple super-phosphate, or one with a slow-release profile depending on the structure and demands of different soils.

Magnesium
Magnesium forms the framework of the chlorophyll molecule and any deficiency is seen long before yield begins to suffer. The yellowing of the leaf is most acute and obvious at the margins of the plot where leaves are exposed to most sunshine. In addition to deficiencies caused by primary lack of magnesium in the soil, secondary deficiencies occur after excessive applications of potassium, which affects the availability of magnesium to oil palm.

Chlorine
In most crops, chlorine is one of the least important nutrients but in oil palm it has a particularly important role in proper maturation of the palm fruits. Deficiencies reduce production by affecting the weight and numbers of fruit available for harvest as well as the weight of the kernel. Chlorine deficiency only becomes a real problem far in land away from sea salt (sodium chloride) which is carried in the air. Often there is enough chlorine in potassium fertiliser (potassium chloride) to prevent problems occurring.

Sulphur and calcium
Sulphur is an important component of several essential amino acids (methionine and cysteine) but is rarely deficient except for young plants in exhausted ferrallite soils with high iron contents. Calcium is important for root development and meristem (the growing point) activity but deficiencies have never been documented.

Aluminium, copper and boron
Aluminium is required in trace amounts but can become a problem in acid soils. The low pH increases solubility causing aluminium ions to build up in the roots with phytotoxic and growth arresting results. Alleviate the problem by liming the soil (adding calcium carbonate) to raise the pH. Copper is essential for the proper working of enzymes involved in photosynthesis. Though only needed in small amounts, deficiencies rapidly show as reduced growth and chlorosis of the middle part of the crown. Correct the problem with sprays of blue copper sulphate at the appropriate concentration because copper sulphate is toxic to many plants above a certain level.
Although boron is the least well understood of trace elements, a deficiency will have marked effects including deformed young leaves commonly called ‘fishbone’ leaf or ‘little’ leaf. They become elongated, shaped like bayonets or corrugated, with the petiole, rachis and leaflets grossly shortened. Untreated deficiency will progress into bud rot and tree mortality. Correct with Borax at a dose of 30 g around the base of each young tree.

Iron, zinc and manganese
Iron has a vital role in respiration as a cofactor for enzymes in the Krebs cycle but deficiencies are rarely a problem even though typical tropical soils are not over-endowed with iron. Similarly manganese is a co-factor for enzymes that drive photosynthesis but field problems have yet to be recorded. Zinc has its role in auxin (a plant hormone) metabolism and if deficiency occurs it can be corrected with applications of zinc sulphate, which is rapidly absorbed and utilised by young oil palm.

Deficiency symptoms are only an indication of nutrient shortfall. Soil testing will tell you the concentration of nutrient in the soil but much of this may not be available to the plant. The only way to determine whether your oil palms have the correct levels of nutrients is to carry out foliar (leaf) analysis.
Foliar analysis is not usually employed until the trees are three years old. Samples should be taken at the beginning of the dry season or during periods of low rainfall, and not for 48 hours after rainfall. Reliable results require a sampling size of up to four trees per 100, depending on age, and uniformity of the area with regard to soil type and fertility and the varieties of palm that have been planted. In order to make meaningful comparisons throughout the life of the trees, leaf samples should always be taken from the same trees. Trees of the same variety and age should be selected, and leaves from the same position on each should be taken. Generally speaking, the sample should comprise at least 100 leaflets – four from each of 25 trees with the same number leaf sampled on all 25 trees. The exact position of the leaf to be sampled will depend on age of tree with leaf 9, and leaf 17 for, respectively, trees at 2-3 years and 3 years and older.  Leaflets are selected from a position one third back from the tip of the frond (leaf). Four leaflets per leaf/tree are picked by taking two lower tier (ranked) leaflets and two upper tier leaflets. The two-tier ranking of leaflets on the palm leaf, in which adjacent leaflets are attached at slightly different levels on the rachis gives the oil palm frond its ragged appearance which is not seen in other palms like coconut.