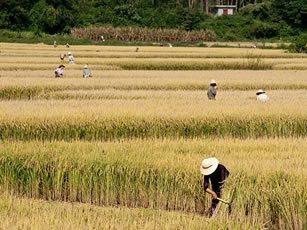 "Rice is the most important staple food for more than half of the world’s population," said DuPont CEO Ellen Kullman. Indeed, rice has been the most commonly used food grain for most people in the world since ancient times and between 1961 and 2002, worldwide per capita consumption of rice increased by 40 per cent.

The growing population in Asia – where rice is believed to have been cultivated for more than 10,000 years – is driving pressure to improve yields to meet increasing demand. DuPont’s Pioneer Hi-Bred aims to meet this challenge. In the first quarter, the company launched Pioneer® brand 27P31 hybrid rice for the “medium maturity long slender” segment in North and East India.
A member of the grass family, rice can be grown successfully under climatic conditions ranging from tropical to temperate with a cycle of three to seven months. The rice family can be broken down into three main categories:
•    Long Grain: About six to eight millimetres long, about three to four times longer than thick. The best long grain varieties come from Thailand, southern US, India, Pakistan, Indonesia and Vietnam.
•    Medium Grain: About five to six millimetres long, but thicker than long grain rice. It releases about 15 per cent starch into water during cooking. Medium grain rice is mainly grown in China, Egypt and Italy.
•    Short Grain or Round Grain: About four to five millimetres long, only 1.5 to two times longer than thick. It cooks in much the same way as medium grain rice. This variety is grown in subtropical areas like California, Egypt, Italy, Japan, Korea, Spain and Portugal.

DuPont's Pioneer rice hybrid has been created to have good standability, grain quality and yield advantage compared to leading competitor hybrids. It won 67 per cent of comparisons in Haryana, a key state in the North Indian market.
DuPont also has a strong rice research program in Asia focused on delivering rice hybrids localised for taste and for growing environments. The company has ongoing business collaborations in Indonesia and the Philippines that will grant Pioneer access to germplasm and allow DuPont to gain access to those markets.