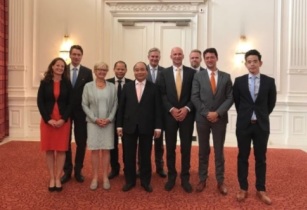 The project was presented to Vietnamese Prime Minister Nguyen Xuan during his state visit to the Netherlands from 8 - 11 July at the invitation of his Dutch counterpart, Prime Minister Mark Rutte.

The Mekong Delta has been struggling through severe drought episodes and salinity intrusion for several years, which escalated recently due to the 2016 El Nino phenomenon, the second most severe since 1965. The Vietnamese government has recognised this as a serious concern and set a call to address and take action on these climate challenges. Approximately 60 per cent of the Mekong River Basin's population rely on agriculture for food security and livelihood.

The project aims to find ways to respond to salinity and drought to the Mekong River delta by collecting information on crops with a focus on salt and drought tolerance and identifying field level technologies and strategies to deal with salinity and drought. It will include practical applications and will seek to find out what works through on and off farm experiments and corp testing. Successful response strategies will be scaled up via farmer and private sector networks.

A key success factor to this project will be the cooperation among the various stakeholders: farmers, research, and the private sector. The Vietnam Farmers' Union; Nong Lam University; Land, Water & Food Consult, East-West Seed and Wageningen University are partners in this project.

For more information on the project, visit the full article from East-West Seed Group here.