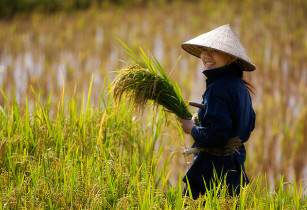 The Paris Climate Change Agreement, for the first time, has recognised food security as a fundamental priority

FAO director general José Graziano da Silva has welcomed this annoucement, which has recognised the fundamental need of safeguarding food security and ending hunger, in addition to highlighting specific vulnerabilities of food production systems to the varied impact of climate change.

The historic climate change summit in Paris has widely acknowledged the need to increase adaptability to climate change in ways that would not jeopardise food production.

“Fighting hunger and climate must go hand-in-hand. FAO is highly encouraged by the fact that agriculture, forestry, fisheries and land use factor prominently in most of the Intended Nationally Determined Contributions (INDCs) − the actions countries intend to take under the new Paris Agreement − and notes that this underscores the need for targeted investment in sustainable agriculture.”

The parties onboard intend to prepare and maintain the INDCs. Least Developed Countries (LDCs) and Small Island Developing States (SIDS) may prepare and communicate strategies, plans and actions for low greenhouse emissions. A contribution will be made every five years by each party, according to the agreement.

According to da Silva, the developments can be considered a game changer for 800mn people suffering from chronic hunger and the 80 per cent of the world’s population that thrives on agriculture. These, said da Silva, are are the forefront of climate change threats.