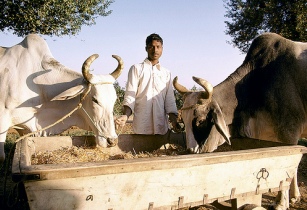 India’s animal feed market has been growing at a CAGR of eight per cent, according to a report which predicts that it will develop into a US$30bn industry by 2020

The report said that while the potential feed requirement is huge and stands around at around 96mn tonnes, production during 2012-13 was only 20.3mn tonnes. The feed industry requirements that are met with the compound feed are only 11 per cent, 14 per cent for aqua feed and 55 per cent for poultry feed.

Nitin Puri, national head of food and agribusiness research management at Yes Bank and lead author of the report, said that there is huge scope for the growth in the sector with the industry becoming more organised.

He added, “Feed sector is taking new initiatives to move from only feed production to storage, which includes silage, green fodder hydroponics and bypassing protein feed.”

With changing income levels and more people eating fish, meat and chicken, there will be a higher requirement of processed dairy, aqua and poultry products, which in turn will result in higher feed requirement.

With the projected growth rate, India will become the largest feed market in the coming years. With multinational companies eyeing the lucrative Indian markets, the animal feed companies in the South Asian nation will have to increase their capacities while keeping in mind quality issues to leverage on the growing demand for compound feed, the report said.