Thailand and Vietnam to supply 250,000 tonnes of rice to Philippines 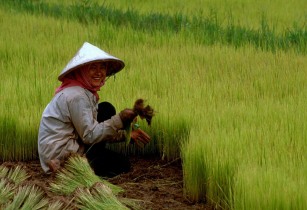 Both Thailand and Vietnam won deals to supply a combined 250,000 tonnes office to the Philippines after revising down their offers to within Manila's budget. In the infancy of President Rodrigo Duterte's government, the first tender has been set up to import up to one million tonnes of rice to secure the staple food whilst the prices are low.

Thailand will supply 100,000 tonnes of 25 per cent of broken rice at US$424.85 a tonne. Vietnam will export the remaining 150,000 tonnes at the same rate, according to the Philippines' National Food Authority (NFA). The prices includes freighting, insurance and other overheads.

Despite the tender, broken rice prices fell to between US$345 to US$360 a tonne, on a free-to-board basis, the lowest in 11 months. The NFA initially rejected high bids from both Thailand and Vietnam, and requested that they submitted revised offers that aligned with their reference price of US$425 a tonne.

"The award of the contracts is subject to approval by the inter-agency NFA council later in the day," said NFA spokesman Angel Imperial.

Around 20 typhoons hit the Philippines each year, some severely impacting on the countries rice production and forcing importation to feed a population of 100mn. In 2010, they imported a record 2.45mn tonnes, although in 2015 they imported less at around 1.8mn tonnes.

Imperial told reporters that "We need sizable import volume to boost our stocks and prepare ourselves for any emergency situation."

The Philippines aim to carry a buffer stock of 30 days of domestic demand rice during the lean harvest season from July to September, but as of late August, this amount dropped to around 21 days worth.

Around half a million tonnes of rice was imported by private traders last year. However, the NFA allows import permits for private traders to import up to 805,200 tonnes a year at a 35 per cent tariff. The NFA will discuss private imports at a later date, according to government source.