Prize awarded by SIMA organization in recognition of the autonomous concept vehicle’s potential to make both machinery and labour more productive, with a tractor based on proven Case IH Magnum drivetrain with a design focused on safety and productivity with new styling to match 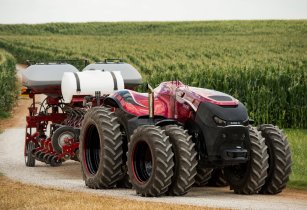 Case IH has been awarded a silver medal in the Innovation Awards scheme of SIMA, the French international farm machinery exhibition, in recognition of the potential its Autonomous Concept Vehicle (ACV), a driverless version of the Case IH Magnum CVX/CVT tractor, offers for the advancement of agriculture. This innovative technology was first shown at the 2016 US Farm Progress Show.

“The need for this technology exists because in some parts of the world it’s increasingly difficult to find skilled labour to work long hours on large farms during busy periods,” says Dan Stuart of Case IH.

“This concept illustrates the commitment of our engineers to finding a solution, and as we progress its development we may see elements of its technology gradually integrated into existing equipment. Precision farming and machine automation are already taking on ever-greater importance in order to meet the need for more efficient, economic and environmentally-friendly agriculture, but at key times of the year long hours in the field are still required, especially when harvesting or establishing a crop.”

The result of five years’ development, the ACV helps meet this challenge, through the ability to make the most of ideal soil and weather conditions while minimising the need for unsociable hours

These large tractors are often used for pulling wide planters at high speeds, requiring a skilled operation and long hours to make the most of weather windows. Autonomous operation puts less pressure on labour during those windows and makes maximum use of them, but the ACV can be seamlessly integrated into existing fleets, and aside from the driverless technology uses a standard engine, transmission, chassis and hitch/pto/hydraulic couplings.