Symaga secures contract for a silo project in Bangladesh 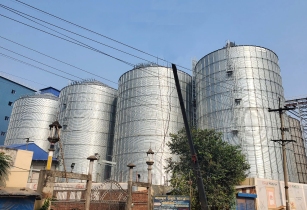 Symaga, a global industrial silo manufacturer, has secured a contract for a silo project with the City group, one of the main agroindustry players in Bangladesh

This new storage plant is located in Rupshi, Dhaka, with a total storage of 406.059 m3. According to Symaga, in early 2021 manufacturing of 49 silos have been completed and the company is now supervising the assembly progress.

Symaga said that Bangladesh is one of the fastest growing markets for agriculture and the company has developed projects for some of the main industrial and agribussines companies since 2012 in the country. In 2016, the company consolidated its presence in Bangladesh with a new storage plant with a capacity of 59452 m3 for Akij flour mill in Dhaka, where it supplied four flat bottom silos. The extension phase of the project concluded with 3 flat bottom silos. In the same year, the company delivered another project for City Auto Rice, a rice mill that belongs to the City Group, with a total scope of 13 hopper silos and a combined capacity of 16.037 m3.

In 2018, Symaga partnered with Bashundhara Ltd for a facility to enhance wheat trade in the country. In the same year, AR Specialised Auto Rive Mill partnered with Symaga for a new silo to store paddy rice.

According to Symaga, Bangladesh has a total 648.269m3 of built storage which have been supplied by the company and hopes to complete the assembly of the new oil plant of City Group by 2021.