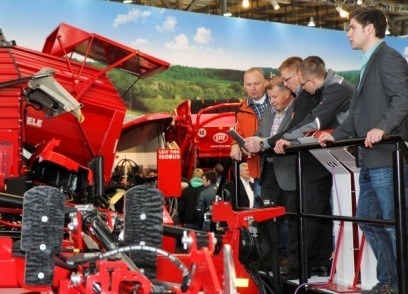 Agritechnica 2011 recorded the highest number of trade and agriculture professional visitors the show has seen. With exhibitors achieving higher results than in the previous editions, the expo showed that the industry is on the rise for the future.

“Agritechnica 2011 has impressively demonstrated the global importance of agriculture and agricultural machinery and equipment. With over 2,700 exhibitors and some 4,15,000 visitors, of whom 100,000 came from outside Germany, a new dimension has been achieved,” said Dr. Reinhard Grandke, Chief Executive Officer of the exhibition organizer DLG (Deutsche Landwirtschafts-Gesellschaft – German Agricultural Society).
He added that this result confirmed Agritechnica’s leading role as global forum for the agricultural machinery and equipment industry.
Agritechnica was more international than ever. The international contingent grew from 47 per cent in 2009 to 50 percent. The 25 percent increase by comparison with 2009 to around 100,000 international visitors was accounted for in particular by the Netherlands (over 10,000 visitors), Switzerland (9,000), Austria (8,400), Ireland (6,100), Denmark (6,000), France (5,400), United Kingdom (5,200), Finland (3,300) and Italy (3,200).
With around 18,000 decision-makers and investors coming from the large farms in Central and Eastern Europe, Agritechnica exerted its expected magnetic draw. These numbers represent an increase of 25 percent by comparison with the figures for 2009. The character of the world’s largest exhibition was impressively affirmed by the rise in visitor numbers from North and South America (6,100 visitors). Visitor numbers from emerging countries such as India, China and Pakistan (2,000) also rose dramatically.

Smart Farming
Larger, faster, wider – these attributes continue to describe many developments in agricultural machinery and equipment, but their significance is increasingly and universally being upstaged by a constant influx of new developments in electronics and sensor technology. Today these factors largely determine the degree of innovation of machinery and systems with the goal of making processes even more efficient, precise, environmentally compatible and thrifty. This was strongly in evidence at Agritechnica 2011 and especially in the Special “Smart Farming - Intelligent and sustainable plant production”. The information offered there on the latest developments in sensor technology, navigation and data management attracted exceptionally high interest among farmers.

Special measures were taken at Agritechnica to counter the foreseeable shortage of skilled workers in the field of agricultural machinery and equipment among manufacturers and in the service sector. In the Special “Workshop Live”, specialists ranging from apprentices to master craftsmen demonstrated their skills and potential on high-tech machines with typical maintenance and service work. Manufacturers also informed interested visitors about attractive career prospects for machine builders, electro-technicians and computer specialists.
More than 10,000 young farmers and students from home and abroad attended the various events at Agritechnica. Particular mention should be made of the panel discussion at which 400 young business people from many parts of Europe discussed farm management and business management issues. Reports by young German and Austrian farmers running farms in Australia, Canada, Poland and Russia met with great interest. One of the highlights of Agritechnica 2011 was once again the “Young Farmer’s Party”, held in the TUI-Arena for the first time this year and attended by over 3,000 young people.

International market
Manufacturers of agricultural machinery and equipment were highly satisfied with the course of the industry’s mega exhibition.
“As one of the three largest industrial trade fairs in the world, Agritechnica now plays in a league of its own – a status attributable primarily to the great innovative force and international market presence of the European agricultural machinery and equipment industry,” said VDMA Managing Director Dr. Bernd Scherer.
“Particularly positive features are the consistently excellent quality of the discussions conducted and the unusually good investment mood displayed by farmers from all over the world”, added Scherer.