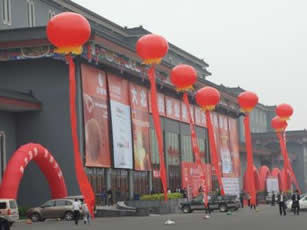 The Chinese National Pig Fair, held as part of the China Animal Husbandry Event (CAHE) in Beijing recently, drew “massive” response. This is no surprise considering the fact that China is the largest swine industry in the world and home to half the globe’s total pig population. The event had more than 1,000 stands which is a testament to the size of this industry.
Pig farming in China is very much a backyard family-run affair at 5-10 hogs per household. However, traditional backyard pig farmers are now moving to the cities to earn more money, and adopting a more consolidated production structure. The event served as an ideal platform for such farmers to get a glimpse of new equipment and avenues in the swine industry.
Although there were a significant number of European exhibitors at the event, vast majority of the stands were occupied by Chinese companies.

Joint ventures
In the past, many European equipment companies were apprehensive of selling their products in China because of the fear of the products being copied by China-based rivals. This prompted companies to hold back from making their most advanced products in China or putting a big development effort into the country. Fortunately, the Chinese government is clamping down on copying, plus many European companies are forming joint ventures with China-based companies to sell their products. Egebjerg, for example, have formed a JV with the Qingdao Huamu Machinery Co and their products are sold under the Huamu label. Aco Funki is also selling equipment in China.
Microware, a UK company, was one of the first companies to develop the electronic sow feeder concept way back in the 1980s. Microwave has now entered into a pact with a Chinese company to install their ESF systems at a demonstration farm. Given that welfare doesn’t rank very high on the Chinese pig production scale it might seem strange to target the Chinese market, but the thinking is that more forward-looking entrepreneurs want to export pig meat to the west, to earn hard currency and as such they want the farms to be up to EU standards in terms of management and housing systems.

Seminars
The Chinese division of French Company Olmix held a seminar in conjunction with the show organizers at the event. Olmix recently received permission from the Chinese government to sell its mycotoxin binder MTox Plus. Company chairman Herve Balusson, who inaugurated the seminar, said it took two years for them to get MTox through the registration process, but the wait was well worth it as the market potential for effective mycotoxin binders in China was vast.
Commercial pig magazines containing adverts have been banned in China, and in order to promote products companies invite farmers to seminars and even organize roadshows across the country.
Lu Nan, Olmix manager for China, speaking about the event, said, “The CAHE show is held in different pig areas across China. Some of the major events are usually held in the in the heart of Beijing, which is quite difficult for farmers to get to the event…and moreover Beijing is expensive.”
Danbred International had a huge stand, strategically placed right opposite the PIC one. Danbred have set up a joint venture with the Danyu Trading Company to build a 1000-sow nucleus unit according to the EU standards in North Jiangsu province. As there are no pig farms within a 10-km radius, the local government has agreed to ensure this area is kept pig free, for the purposes of biosecurity.
Danbred International is currently exporting Yorkshire, Landrace and Duroc gilts and boars on a regular basis to China, what Danbred’s International Director Henrik Boholm term it as “Danish Pig Tsunami”.
CAHE is certainly well worth a visit for those who wish to do business with the Chinese pig sector.