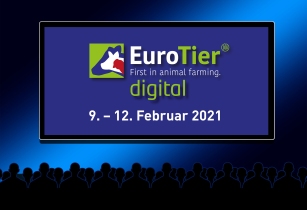 More than 41,000 participants connected to the digital platform created by the DLG (German Agricultural Society) during the four days of the event (9-12 February). In addition to being able to access the offerings of around 1,200 participating companies, the visitors were also able to take part in 300 specialist events and to conduct targeted networking with the industry. Some 45% of the participants were located outside Germany.

“With EuroTier digital, the DLG’s new platform has successfully positioned itself as a digital business network and forum for professional exchange for the national and international agricultural industry. The access and engagement rates speak for themselves. The lively participation in events and the strong interest in the digital technical programme are a reflection of the networking competence of the farmers, the industry and our members. The digital format will be a complement to our physical trade fairs in the future,” concluded Dr Reinhard Grandke, CEO, DLG.

Current figures at a glance

Over 41,000 participants connected to the digital platform over the four days of the event. A total of around 255,000 engagements (including 1:1 audio/video calls, 1:1 chats, expo show room visits, user networking) and over 780,000 page impressions were recorded. About 45% of attendees came from outside Germany. In total, 128 countries were represented on the digital platform. The investment intention of participants was exceptionally high, at around US$3.3bn (2.8bn euros). One reason for this is the high rate of decision-makers - 76% - on the platform, shown by current visitor registrations.

Under the guiding theme of ‘Farming in the food chain’, the organiser, DLG, had set up a technical programme with eight parallel online video channels, transmitting more than 300 interactive programmes that addressed relevant future topics affecting the global livestock sector and the decentralized energy supply industry. Visitors on the platform were able to interactively participate in numerous talk shows and discussion events. In total, the professional programme was visited around 83,000 times during the four days on the platform.

Highlights included digital industry events such as the International Poultry Event, the Cattle & Pig Event and the EuroTier Innovation Award ceremony. A special highlight was the DLG-Wintertagung (‘DLG-Winter Conference’), an important annual event for German farmers, which this year was held in parallel on the DLG Digital Platform hosted by the DLG on 11 February registering over 2,500 attendees.

The EuroTier digital was officially opened by German Federal Minister of Food and Agriculture, Julia Klöckner, who in her opening speech encouraged farmers in Germany to participate in the developments in agriculture and animal husbandry. Klöckner emphasised that it was not just technology or how to reduce workload that constitute the topics of today, but, more importantly, the social acceptance of livestock farming and animal welfare.

Klöckner also noted that the industry is undergoing radical change, which can, however, only be successful and sustainable if done proportionately with a view to the long-term perspectives for livestock farmers in Germany. Indeed, should the production leave Germany, nothing would be gained, quite the opposite. Neither environmental nor animal welfare issues can be solved by exporting them. Klöckner commented that these issues would be discussed at the world's leading trade fair, EuroTier.

Hubertus Paetow, president of the DLG, noted that animal husbandry in Germany and Europe will continue to look different in the future than in many other regions of the world. Higher demands on animal welfare and sustainability require different technical concepts. This poses significant challenges for manufacturers and farmers alike. However, it also presents opportunities for those who recognise the trends early on and implement them efficiently. Paetow concluded that to maintain this sustainable animal husbandry in Germany, which includes maintaining the economic perspective in global competition will require functioning value chains, which can and must be supported, at least temporarily, with political instruments.

More than 1,200 exhibitors presented information, in real-time, on their range of products and services using various multimedia tools. Exhibitors were also able to network and engage directly with participants via chat and video meetings. In addition to offering new technologies and consulting for livestock farming, the companies’ offerings also included the upstream areas of livestock farming, such as breeding, techniques and farm input, as well as downstream areas, such as processing and distribution channels. Exceptional innovations presented by exhibitors eligible for a coveted gold or silver award were evaluated by an independent jury.

All content of EuroTier digital will be available on the digital platform from 18 February until 15 April. Participants will thus continue to have the opportunity to find out about exhibitors' offerings as well as the content of the technical program. Likewise, they can network with companies via text messages and contact requests, using the platform.

The next EuroTier will take place from 15-18 November 2022, at the Hanover Exhibition Grounds, Germany. The trade fair will be complemented by the DLG Digital Platform. EuroTier and EnergyDecentral are hosted by the German Agricultural Society (DLG).