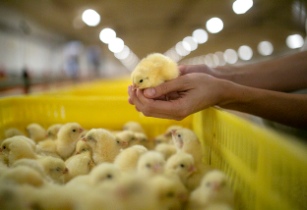 The advantage of these adjustable speed endwall fans is that the user can reduce the power consumption (kWh) by adjusting the speed of the fan. Hotraco Agri is the first independent party that achieves the highest power savings with its control system by having these endwall fans operate at the most optimum speed.

Traditional end-wall fans with high air performance consume a constant amount of current because they can only run at maximum speed.

With the new generation of end-wall fans, in combination with the Orange Fan Control, it is now possible to greatly reduce the power consumption.

The Orange Fan Control switches on the end-wall fans at reduced speed as ventilation requirements rise. Only once all fans have been switched on, at 60 per cent of the maximum speed for example, will the speed of all the fans be gradually increased as demand for ventilation rises.

With the Orange Fan Control, the user can run the end-wall fans at a lower speed so that the ventilation system consumes less power.

Suitable for all new generation fans

The Orange Fan Control aims to control all types of adjustable speed end-wall fans and is also suitable for all brands including Multifan, Munters and Pericoli. The duty cycle of the adjustable speed fans depends on the type of fan and the possible pressure load at a reduced speed.

Hotraco Agri's Orange Fan Control is integrated into the intelligent Fortica system. With the Fortica control system, the user can ventilate livestock housing optimally. This automation system also controls and monitors all other processes in a poultry house. From climate, feed and water control to animal weighing, lighting, egg counting and nest control.