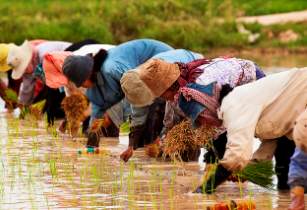 Cambodia’s minister of commerce has announced that the country will step up efforts to export rice to Africa, Middle East and the European Union

“We have to diversify our market, we cannot put all our rice into one basket,” said Sun Chanthol. “We have to export our rice beyond the European market, so we can improve the livelihood of our farmers.”

In his three-day visit to Kuwait in December 2014, Chanthol aimed at opening new avenues for Cambodian-made agricultural goods to enter the Middle East region.

“We want to open the new market in the Middle East because we have not focused too much on the region in past times. And we want to expand our export destinations,” said Ken Ratha, spokesperson for the Ministry of Commerce.

“It will also to pave the way for our private sector because the Ministry of Commerce also set up a department to handle Middle East related issues, which will facilitate commercial relationships, similar to that of the European Union,” he added.

Khaled Al-Khaled, member of the Kuwaiti Chamber of Commerce and Industry, noted that Cambodian keenness on encouraging foreign investment had positive effects on

Kuwaiti investors and prompted them to carry out projects there.

Cambodian rice has already been gaining a positive reputation overseas. In 2012 and 2013, Cambodian jasmine rice won the prize for best rice from the Rice Traders World Rice Conference.