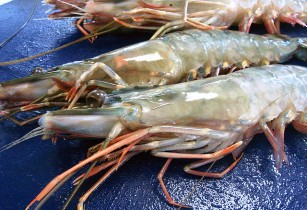 Yamamoto, the technique’s developer, is enthusiastic about the opportunities for the ‘third water’. (Image source: Leon Brocard/Flickr)

The artificial water is a blend of fresh water and a carefully measured mix of minerals, including salts of sodium, potassium and calcium.

The project in the Cambodian province of Takeo will be led by Japan’s overseas aid organisation — Japan International Cooperation Agency (JICA). Roughly 30,000 giant river prawns are to be reared at each of three farms from August in 2014. The prawn sells for eight times the price of fish in Cambodia. JICA will monitor the farms’ efficiency and cost savings.

Toshimasa Yamamoto, professor of Okayama University of Science who developed the technique, said, “This is magic water that enables aqua farming without chemicals. We can turn a mountain village into a fishing village.”

According to Yamamoto, farmers add about 10gm of minerals to 1 litre of fresh water — a mixture that produces a slightly salty taste. This produces a medium suitable for aquaculture that costs 10 per cent the price of traditional artificial seawater. The technique was patented in 2012.

To date, tiger puffers and eels have been cultivated with the water.

Research has found a reduced incidence of disease because the water has properties that do not exist in nature and lacks the infectious agents often found in seawater and fresh water.

Moreover, fish farmed this way tend to grow faster than in their natural habitat. The university ships tiger puffers six to eight months earlier than those cultivated in seawater.

Yamamoto, the technique’s developer, is enthusiastic about the opportunities for his water, which has been dubbed “third water.”

He said the world needs to reduce its dependence on ocean-based aquaculture farms, which can be strongly affected by weather.

There is mostly no need to regulate the water temperature at land-based aqua farms in Cambodia, because temperatures remain high throughout the year.

However, Yamamoto added that some countries might need to use electricity to keep temperatures constant for certain fish species. Currently, he is studying ways to cut the cost of this by using geothermal and solar heat.

“Aquaculture is possible anywhere if you only have water and electricity,” he said. “In the future, we hope to conduct aquaculture in deserts — and even in space.”