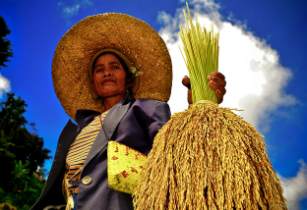 The Philippines’ heirloom rice, inherently unique in its natural features and quality, was featured at the Madrid Fusion Manila (MFM), Spain, in April 2015

Heirloom Rice Project (HRP) project leader Casiana Vera Cruz said, “Heirloom rice is in high demand in the export market and is now being promoted locally as an important and exceptional ingredient in Filipino cuisine.

“More importantly, it is grown by farmers in highland communities, mostly in marginal environments.”

The Philippine Department of Agriculture (DA) is funding the HRP as part of its bigger efforts to provide holistic support to increasing rice productivity in the Philippines to help heirloom rice farmers harvest more while making sure that the traditions attached to the production of these special rice varieties is preserved.

Some 20 heirloom rice varieties from four provinces of the Cordillera Administrative Region (CAR) — Kalinga, Benguet, Mountain Province and Ifugao — were showcased in the exhibition held from 24-26 April as well as in the food tasting and ‘food tunnel’ sessions of the event.