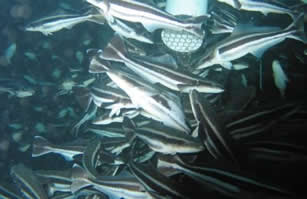 Aquaculture is the most rapidly growing food production sector in the world with an average growth of 8 per cent. More than 90 per cent of the global aquaculture production is contributed by Asia.

Increasing demand
Since the yield from capture fisheries is not expected to increase greatly, there is an emphasis being placed on the aquaculture sector's ability to provide increasing quantities of fish to satisfy increasing demand in all regions. Several conditions must be satisfied in order that aquaculture be able to achieve this expectation.
The massive expansion of aquaculture required will need increased production area, as well as greatly increased intensity of production. Obtaining the land and water may be possible if the value of fishery products increases so that aquaculture can challenge other production systems for the use of the feeds, land and water required to effect this production. Alternatively, increased efficiency in the use of water and intensified production will reduce land requirements. The current intensity of production in many States of Asia is such that there is considerable scope for increased production per unit area. However, the increased feed usage and probable increased water requirement will be a constraint. The current reliance on fish meal as a protein source for aquaculture feeds is a potential constraint.
Aquaculture currently competes with the livestock sector for fish meal for feeds. If fish value increases the “purchasing power” of aquaculture may draw this resource away from the livestock sector. There are calls for aquaculture to reduce its reliance on fish meals and increase the efficiency of their utilization. Whilst more efficient use of fish meal is possible, reduced reliance may be more difficult to achieve. In the face of increasing purchasing power of aquaculture feeds, it may be the livestock sector which makes the greater progress towards reducing reliance on fish meals.
One scenario considered in the IFPRI/WFC report is that a rapid expansion of both the scale and efficiency of aquaculture could lead to decreasing fish prices (this was the only scenario where fish price decreased). The efficient culture of herbivorous/omnivorous fish is already a reality; however, it is apparent that current trends indicate that aquaculture is drifting towards higher value species that present greater profit margins. This trend is even being seen in species that are traditionally considered to be relatively low input species such as tilapia. The production of tilapia in several States is moving away from greenwater fertilized systems towards pellet-fed intensified systems. This may be a reflection on the available areas for aquaculture and increasing restriction on water availability and to some extent environmental requirements. The production of higher value aquaculture species allows investment in more intensive production systems and their associated effluent treatments. The higher value products may also be easier to market and often have greater export potential.

Asia shrimp
Asia has been the major shrimp producing area followed by Latin America. During the early part of this century, black tiger was the predominant species accounting for 46 per cent of the global production. However, a major shift to vannamei shrimp by China and Thailand has made this species far more significant in the global aquaculture production basket. Consequently, vannamei shrimp production has spurted and contributed 63 per cent of the global farmed shrimp harvest in 2006. This has also elevated China and Thailand to the top position in global farmed shrimp production.
World fishery trade has continued to surge during the past decade. In terms of value, the top seafood importing countries were Japan, the US, Spain, France, Italy and China. However, in terms of quantity, China was the top importer.
Imports of seafood continue to be quite strong in the US markets and shrimp remains the top product group to be imported.
In per capita consumption, shrimp is far ahead of other seafoods such as tuna, salmon and pollack.