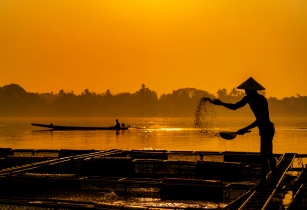 The company also announced the success of the Vung Tau multispecies trawl fishery improvement project (FIP) in Vung Tau province, which has been accepted into the MarinTrust Improver Programme as part of its multispecies pilot.

The Fishery Improvement Project (FIP) aims to encourage responsible fisheries according to international standards and protect biodiversity. This will increase the capacity of Vietnamese seafood producers and products to be recognised worldwide.

Montri Suwanposri, president of CP Vietnam said that the multispecies pilot project in Vung Tau province was initiated as a guideline for fisheries in areas with multi marine species. The project is the second multispecies project that was certified by MarinTrust, after the Gulf of Thailand mixed-trawl FIP. The company believes this effort will improve capacity and opportunity for the aquaculture industry in Vietnam.

He also added that the company emphasised responsible aquaculture operations to ensure food security and minimal impact on the environment. As a result, CP Vietnam has committed to sustainable and traceable raw material sourcing in line with Best Aquaculture Practice (BAP) standards and other internationally recognised principles.

The company also collaborates with stakeholders in the industry such as the government, fishmeal plants and fishing boats to find a systematic and sustainable solution such as collecting data that included the amount of fish caught, fish species, tools and equipment to catch fish.

Later this year, the company said it will also have a follow-up on the work of the pilot project be in accordance with its action plan and it expects to help develop the capacity of local fishmeal plants and help a couple of them to get MarinTrust standard.