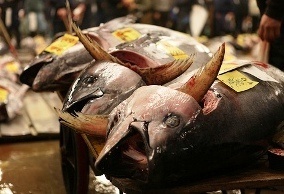 Environmental group Greenpeace has urged the Philippines government to design an effective measure to stop over-fishing, especially of tuna

Greenpeace Southeast Asia regional oceans campaigner Mark Dia said, “The Philippines government should secure the livelihood of its fishermen folk constituents by ensuring the sustainability in our seas.

“The Philippines should instead work more closely with the rest of the Pacific region and help put in place strong science based management measures that can help stop over-fishing.”

Greenpeace said the livelihood of the fisherman folk in the country was being threatened by over-fishing, which may result in fish stock dwindling.

“Our livelihoods are already threatened,” he underscored.

Gonzales added that with the current situation, the hook and line tuna industry was being sacrificed for canned tuna and called on the big tuna traders to avoid catching baby tuna.

According to him, the government must “act now to ensure that juvenile tuna catches are reduced. Urgent reduction in excess purse seine fishing capacity must also be implemented”.