Vietnam and China join hands in fishery release and conservation 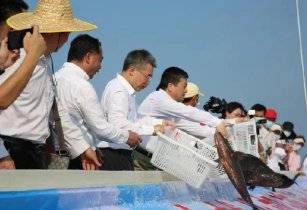 Ma Youxiang emphasised that the release and enhancement of fishery resources in the Beibu Gulf can significantly help protect marine ecosystems, improve productivity, and increase the income of fishermen. Since the signing of the Memorandum of Understanding (MoU) on cooperation in the enhancement, release, and conservation of fishery resources in the Beibu Bay between China and Viet Nam, witnessed by general secretary Xi Jinping and general secretary Nguyen Phu Trong in 2017, the countries have jointly held four such joint activities in Guangxi, China and Halong Bay in Vietnam.

According to the Chinese ministry of agriculture, the country has released a total of over 150 million fry of various aquatic species, including red sea bream, blackhead sea bream and redtail prawns into the Beibu Gulf, and has seen positive results in resource restocking, as the recapture rate remains at a high level of more than 5%.

Chinese officials also noted that the country is willing to continue negotiation with Vietnam for a new agreement on fishery cooperation in the Beibu Gulf to enhance cooperation in resource investigation, fish release and restocking, law enforcement of fishery and fisheries emergency response.

Vice Minister Ma also expressed the willingness to carry out exchanges on aquaculture, strengthen personnel training, and facilitate aquatic product trade and investment in aquaculture with Vietnam, as well as promote pragmatic fisheries cooperation with Vietnam under the Belt and Road Initiative and the Lancang-Mekong Cooperation mechanism.