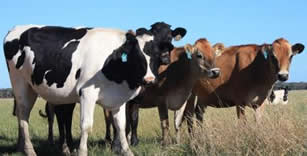 Governments could save billions of dollars by stepping up the prevention and control of high impact animal diseases, some of which pose a direct threat to human health, according to the FAO.
Many other animal diseases have a negative impact on people's livelihoods. Pandemic influenza viruses H5N1 and H1N1, foot-and-mouth disease, Rift Valley fever, and rabies are among the more recent disease outbreaks. Land use, ecological dynamics including climate change, and expanding trade and trade routes are all posing new challenges to animal disease prevention and control, the UN agency warned.
Emerging threats
These emerging threats are also related to increased urbanisation and strongly growing urban demand for meat, milk and eggs. A rapid increase and intensification in poultry, production in East Asia translated into a five-fold increase in duck meat output between 1985 and 2000. In 2008, over 21 billion animals were produced for food globally, a figure expected to rise by fifty percent by 2020. "We are expecting the costs to human, animal and plant health of these pathogens, and their overall economic costs, to rise substantially over the next decades" said Juan Lubroth, FAO's Chief Veterinary Officer. In the United Kingdom, for example, a 2001 outbreak of foot-and-mouth disease was estimated to have cost the government and private sector between US$25 and 30 billion. The 2002-2003 Severe Acute Respiratory Syndrome (SARS) outbreak cost China, Hong Kong, Singapore and Canada between US$30 and 50 billion.
In developing countries, high impact transboundary animal diseases pose a direct threat to the food security, nutrition and income of rural communities that are dependent on livestock. This adds to the difficulties of achieving the Millennium Development Goals, including the reduction of hunger, poverty, child mortality and ensuring environmental sustainability.
The collective influenza virus gene pool currently circulating in humans, poultry, pigs and other animals is becoming more diverse with new strains of the virus across different hosts becoming increasingly common.
Given the increase in urban food waste, an increasing number of scavenging animals such as dogs are roaming in urban spaces and human habitats. Certain wild species of animals are also thriving in urban environments posing new threats to human health such as rabies.
As a result of human population increases, people are farming animals in locations closer to natural habitats, thereby increasing the risk of disease transmission between domestic animals and wildlife and thus affecting biodiversity and conservation efforts.
"This is not science fiction," said Lubroth. "The threats are very real. Deadly and economically devastating livestock epidemics have existed throughout history but there is no doubt that more pathogens are emerging - and spreading. The good news is, with the right policies, they can be better detected and contained."

One Health
FAO, in partnership with the World Organisation for Animal Health and the World Health Organization has adopted a One Health strategy to more effectively detect and combat these new pathogens.
Drawing on the agency's experience in past animal health emergencies, the One Health initiative aims to make a key contribution to the global response to disease outbreaks, implementation of effective prevention and containment strategies and management of risks of disease emergence, including improving knowledge of disease-emergence drivers in livestock production and in associated ecosystems.
FAO has requested donors to invest very significantly in its suggested five-year programme on the One Health initiative.

This investment is targeted with priority to action in South, Southeast and Central Asia, Africa, Latin America and the Caribbean - regions particularly vulnerable to the emergence and re-emergence and spread of infectious diseases.
Actions envisaged include:
• enhancement of disease early warning and detection systems;
• strengthening of capacity for surveillance and response;
• identification and  assessment of disease drivers in food animal production and natural resource management;
• strengthening of the capacity of public veterinary services in preparation, prevention and response to animal disease occurrence;
• assessment of the social and economic impact of diseases;
• associating private sector stakeholders with public sector action in livestock and wildlife health.
Special attention of the programme is given to risk communication at all levels of action.