Vietnam's central Highlands province of Lam Dong has agreed in principle to the implementation of two high-tech pig farming projects with a total investment capital of US$19.7 mn 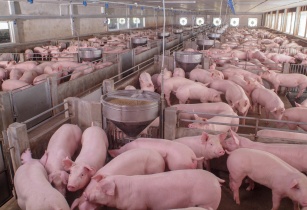 The province has been trying to restore pig herds to stabilise production and supply to the market. (Image source: Adobe Stock)

According to the Ministry of agriculture and rural development (MARD), Vietnam, the first project will be an investment from Vi Na Farm Livestock JSC based in Dong Nai Province and will be conducted in Loc Bao Lam District of the Lam Dong Province, on an area of over 42 ha.

The project aims to build a modern and environmentally friendly pig farm with a scale of 4,300 breeding sows and 10,000 gilts per year. The US$15.3mn project is expected to provide the market with 93,600 high-quality breeding pigs at a rate of 10,000 meat pigs per year.

Lam Dong Province also approved another high-tech pig farming project with investments from Me Non Production Trading Company. The project will be built in Da The district, on an area of 20.5 ha. The US$4.3 mn project will build a farm with 1,200 sows and provide about 32,000 piglets per year.

The Ministry said that since the African swine fever epidemic ended in August 2020, Lam Dong Province has been carrying out a plan to restore pig herds throughout the province to stabilise production and supply to the market.