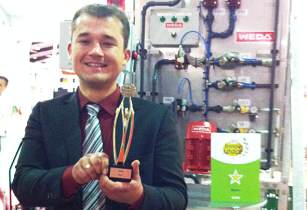 According to the jurors, Nutrix+ was an innovative and technologically mature support programme for the breeding sow as well as the farmer.

Nutrix+ is a fully automatic and sensor-controlled liquid feeding system for suckling piglets. Through the system, sows’ milk substitutes and prestarters can also be fed out in smallest amounts. This ensures fast and healthy growth of suckling piglets, and at the same time relief of the farmer and of the mother sows.

The system operates with sensor feeding and is modular extensible so that an upgrading of up to three mixing containers is possible. This allows for the employ of various kinds of feed mixes. Moreover, individual mixing temperatures can be automatically adjusted by the computer. The right mixture can be prepared in the independently working Nutrix+ feed preparation and can then be fed out to the piglets in the individual pens.

The newly-developed double troughs with grids ensure permanent social contacts of the piglets between two pens. Due to the grids, the troughs are rather bright and are therefore quickly accepted by the animals.

The maximum levels of hygiene are maintained as cleaning procedure by means of acid or lye rinsing can also be employed, stated Weda.

Nutrix+ has been on the market for more than a year now, and Weda said the product is popular with pig farmers in Germany and elsewhere. Due to larger litter sizes, breeding sows are frequently unable to produce enough milk, and recover less well after farrowing. Right from the beginning, the suckling piglet feeding system Nutrix+ is able to take countermeasures.

Additional feeding, even for the smallest piglets, no matter whether with sows’ milk substitutes, prestarters, yoghourt, or piglet raising feed I, is possible without any problems, said Weda.

SPACE took place between 15 and 18 September 2015 at Rennes, France. It is a leading show for professionals in the livestock industry, and caters to poultry, pig, dairy and cattle.