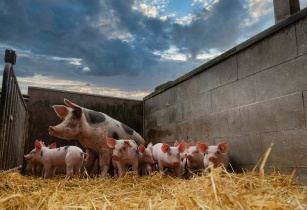 The equipment runs stably, the feed material produced is of good shape, and the pellets are uniform, making Huize Wen's customers very satisfied

Entering 2021, the industry concluded that African swine fever (ASF) outbreaks are more frequent in winter in the north and more frequent in summer in the south. That has undoubtedly raised concerns of outbreaks in southern swine-raising provinces such as Guangxi, Guangdong, and Yunnan, presenting a threat to the swine industry in Huize County.

It is important to prevent and control the epidemic and ensure the healthy development of the swine industry.

Removal of ASF virus carried in feed through feed processing technology has become an important issue in the industry. The fourth- generation feed expansion process of Zhengchang, which won the 2011 China Feed Industry Major Technological Progress Project Award, can kill ASF viruses at the source and is the most effective in actual use by many customers.

This time, the high-end, medium-to-large-sized swine feed production line built  by Zhengchang for Huize Wen's is eqipped with Zhenchang's fourth- generation feed expansion process. The use of Zhenchang's expansion technology can not only kill the swine fever virus at the source, but also incraese the survival rate of suckling pigs in the seven to 31 days creep feeding peroid by 99% and reduce the feed-to-meat ratio of piglets by 0.1%.

1) It can completely kill the ASF virus at the source, enabling piglets to grow up healthily;

2) It can eliminate anti-nutritional factors in feed raw materials and reduce urease content in soymeal; suckling pigswill not have diarrhea after eating, and their survival rate is high;