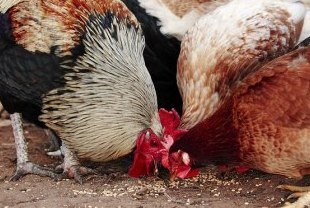 Strict adherence to good management practices throughout the poultry operation, especially the watering system, is the only way poultry producers can reduce the impact of respiratory disease on their flocks and profits.

If the birds are showing signs of infection, a producer can respond with medication. But all too often, the birds exhibit no signs of infection other than underperformance. Respiratory disease is not a single virus or bacteria; it generally is a complex of both, making prevention and treatment far more complicated.

Even though farmers are vaccinating most flocks, respiratory lesions still turn up at slaughter on a regular basis; and these defects hurt weight gain and carcass quality.

The US Department of Agriculture reported, "As we enter the 21st century, the single most important issue for poultry farmers will be how to lessen the direct and indirect cost of disease. A threshold has been reached where poultry farmers will have to either produce more birds to overcome the current cost of disease or produce the same amount of birds at a lesser cost with value-added disease control measures."

The primary culprit in respiratory disease is ammonia, which is a result of moisture reacting with poultry droppings in the litter. Ammonia destroys the cilia (hair like projects that trap dust and other particles) in the chicken's trachea. This leads to erosion of the tracheal lining. The irritated tracheal lining is more susceptible to infection by viruses or bacteria, and this can cause additional destruction of the trachea. Finally, an E. coli bacterium from the litter gets into the trachea and the bird develops airsacculitis.

It makes sense, then, that you can reduce the incidence of respiratory disease by controlling ammonia in the poultry house. One strategy for controlling ammonia is to keep the litter dry; a second is to remove ammonia with ventilation. Ziggity recommends a combination of the two.