On 22 November 2022, the director general of animal husbandry and animal health at the Agriculture Ministry Nasrullah held a discussion focusing on the significance of controlling antimicrobial resistance (AMR) as a means of ensuring food safety and security 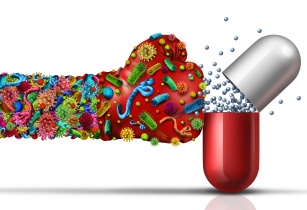 Given the importance of antimicrobials to the poultry sector, good practices are indeed necessary to prevent AMR. (Image source: Adobe Stock)

Antimicrobial drugs are often administered as medicines to fight disease-causing microbes that cause infections in animals, plants and humans alike. However, these microbes often develop a resistance to these drugs upon continual usage, which results in their ability to counter the toxic effects that antimicrobials have on them. In the poultry sector, antimicrobials are widely used to prevent and treat a variety of diseases and are also sometimes used as growth promoters in livestock feed to enhance production. Hence, the emergence of AMR can lead to untreatable infections that can have a huge impact both on the affected animals and the people who work with these animals.

As mentioned in a report by Antara News, the Ministry of Agriculture, along with the World Organization of Animal Health (WOAH), the Food and Agriculture Organization (FAO), and the poultry and pharmaceutical industries of Indonesia revealed five steps that industries could adopt to keep AMR in control. The deputy for coordination of health quality improvement and population development at the Coordinating Ministry for Human Development and Culture, Agus Suprapto pointed out that support and commitment from the private sector was crucial in achieving reduced usage of antimicrobials in broiler farms during prophylaxis.