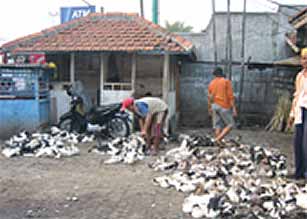 THE RECENT FOOD riots in several developing countries serve as a painful reminder of current problems in matching food supply and demand worldwide. Competition for the use of agricultural land and forests is increasing in pace with the growth in the world's human population: seven billion today, nine billion by 2050. Agricultural land and forests are threatened by urbanisation and public facilities such as roads and recreational parks, as well as by non-food crops used for biofuels or to produce textiles such as linen, cotton and jute, the latter competing with synthetic textiles that are often derived from petrochemicals.

Growth in demand With regard to livestock production, world demand for animal protein (milk, eggs, meat) is expected to rise by 50 per cent by 2020, even if the economic growth of recent years is now stabilising. In addition to the increase in the world's human population (principally in developing countries), this growing demand will come from hundreds of millions of poor households in emerging countries joining the middle classes. These households are changing their dietary habits and will in future be eating three meals a day, with far more milk, eggs and meat than was previously the case. The only way to meet this enormous worldwide demand for animal protein is by intensifying livestock production.

This will lead to increased sanitary and environmental risks, which cannot be effectively controlled without increasingly strict regulations and Veterinary Services that have the power to enforce them within their field of competencies. It should also be noted that more than a billion people around the world currently meeting the criteria for poverty have an economic activity involving livestock. Animals provide them with food protein but they also provide work power (traction, ploughing, irrigation), a cash income and precious natural fertiliser. Incidence and access Animal diseases cost all these social groups dearly.

Few studies are available, but it can be estimated that, at the worldwide level, average losses due to animal diseases are more than 20 per cent. Reducing the incidence of these diseases is therefore one of the priorities to be considered in order to feed the world. This requires a clear political will, which the World Organisation for Animal Health (OIE) and its partners such as Food and Agriculture Organization (FAO) and World Health Organization (WHO) must encourage at a worldwide level.

Indeed, access to an adequate supply of good quality food is not just an agricultural problem; it is also a worldwide public health problem and must also be approached from this point of view. Since providing everyone with access to animal protein could be greatly facilitated by reducing the losses caused by animal diseases, it is important to ensure that countries have good quality Veterinary Services capable of enforcing sanitary legislation in collaboration with livestock producers.

For their part, producers must be covered by fast and equitable compensation mechanisms in the event of their animals having to be slaughtered for sanitary reasons, and they should receive appropriate training in animal disease control systems and be fully informed of the need to work hand in hand with veterinarians.

To this effect the OIE has adopted standards on the quality and effectiveness of Veterinary Services. It should also be noted that in most countries sanitary controls on food products of animal origin and the prevention of related biological hazards (bacteria, viruses, parasites, toxins) are largely under the responsibility of the Veterinary Services. A document prepared in collaboration with the other international organisations involved in this field was presented to, and adopted by, the national Delegates of OIE Member Countries and Territories during the General Assembly in May 2008 (‘The role of Veterinary Services in Food Safety').

While it is true that we already have effective control methods to deal with a number of animal pathogens, there is still much work to be done if we are to achieve a significant reduction in current animal production losses, notably by developing new vaccines, medicines and diagnostic tests. It is quite clear that public–private partnerships are indispensible in order to speed up research programmes to develop the tools needed to reduce losses from the various animal diseases, including those transmissible to humans. This research is in fact so expensive that even multinationals are unwilling to embark on developing the products we need.

Public sector involvement in this field is both necessary and desirable, since this action clearly falls within the concept of a global public good. The OIE has a duty to support and even to promote these changes, but they will be greatly facilitated if – unencumbered by taboos, but with the appropriate precautions – they can take advantage of the incredible potential that biotechnologies have to offer, notably in the field of vaccinology. The OIE has already begun to address these topics, and right now our experts are drawing up the first recommendations for submission to our organisation's Specialist Commissions and the General Assembly of national Delegates to the OIE. Given the importance of this topic, I shall of course be keeping you updated on progress made in the field.