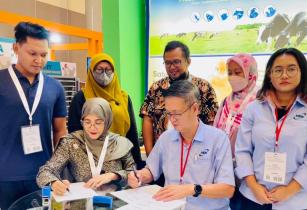 On 9 November 2022, the signing ceremony was held during ILDEX Indonesia at the Indonesia Convention Exhibition (ICE) in Jakarta. The agreement was signed by the MVP executive director, Rashidah Ibrahim and TDN president director, David Hoo.

MVP is the sole veterinary vaccines manufacturer in Malaysia since 1992. The primary objective of the company is to focus on the manufacturing and marketing of animal health products and services which currently consists of high-quality vaccines that are both live and inactivated. These vaccines are being used extensively in the poultry and swine industries as protection against commercially debilitating diseases.

In the future, MVP plans to register for a swine disease vaccine in addition to the four registered products in Indonesia. The best-selling vaccine in Indonesia is MyVAC ND V4 HR which a live attenuated vaccine for Newcastle disease in chickens and displays unique characteristics of ‘heat resistance’.

With this collaboration, MVP wishes to re-enter the Indonesian market through TDN and expects a good response from the industry, especially from those customers that have used their products previously.