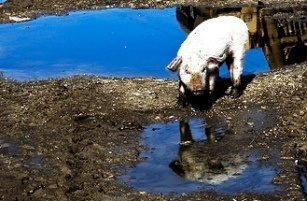 DENR secretary Ramon JP Paje said, “We call on poultry and piggery owners to put premium on pollution control and wastewater treatment facilities to ensure that the wastes generated by their operations will not affect the surrounding environment and the health of the people.”

Paje issued the call amid complaints against some poultry and hog raisers about their untreated sewage spilling into rivers and other water bodies, a violation of the Clean Water Act of 2004.

“Farm owners should immediately employ corrective measures so as not to aggravate the situation,” Paje said.

The DENR chief also warned that continued violation of the clean air and water laws may result in permanent closure of erring poultry and piggery farms.

“We do not want to close poultry and piggery farms because it will create more problems like dwindling supply of eggs, chicken and pork and soaring prices of the products,” he pointed out.

Paje, however, said that while the DENR will recognise the contribution of the chicken and hog industry to agricultural production and to the economy, this would not give them the license to pollute the environment.