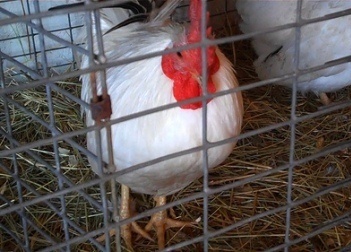 Nearly 700,000 birds died when protesters cut off the power supply to a poultry farm in Vizianagaram district in India, which cut the air conditioning and caused asphyxiation

A mob barged in to the Radha Sakku Agrio Bio Pharma and switched off the power supply. When the staff tried to start the generator they were attacked and beaten up leading to the massive death of the birds. The company officials have said that it caused a loss of US$3.7 million.

The long drawn protest against the pollution and the stink emitting from the poultry farm in Karlam village in South India took an ugly turn when hundreds of people from surrounding villages staged a sit in protest demanding the closure of the unit, claiming that the stink and the pollution was adversely affecting their health.

The local police and revenue department officials tried to sort out the issue by talking to the local leaders and the company officials. The protestors demanded to know how the farm had been allowed to set up such a unit so close to the villages and what kinds of chemicals were being used in the plant.

Though officials tried to placate the people with the promise of a meeting on July 22 to solve the matter the situation suddenly got out of hand. Another group of villagers attacked the company and ransacked it, switching off the power supply.

Officials said that the birds were kept in air conditioned halls as the region is still in the grip of a heat wave.