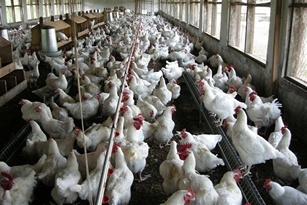 Efficient feed utilization has a great effect on profitability as feed represents the major cost of poultry production.

The mode and pattern of poultry feeding and drinking systems have evolved to conform to the increasingly sophisticated production systems. Backyard free-range production systems, where supplementary feed was scattered by hand over the whole area of the ‘run’ with water provided in simple shallow containers, have now transformed into large scale and intensive production systems. Provision of feed and water can be closely measured, controlled and automated by using these advanced systems.
One of the biggest problems faced by producers is upgrading/replacement of poultry feeding equipment in line with growth and development, and corresponding changes in the needs of birds. This includes knowing exactly when to change the system and the huge labour input required. Problems can be significantly reduced by adopting an ‘all-age’ broiler feeding system comprising a line system of shallow pans for starting chicks, which can subsequently be telescoped out into deep pans as the chicks grow. The shallow pan rests on the ground and when the line is raised it telescopes out into a deep pan suspended at a height which is suitable for the now grown bird.
Mechanisation and automation of feeding systems is the key to reducing labour costs. This can be achieved through the use of sliding auger trough feeding systems for broilers powered by low horsepower (hp) motors and used with ‘hens only’ or ‘all-bird’ grills for the troughs.  Other specific systems include continuous-loop, breeder-pan feeding systems that accommodate pullets from one-day old and which can be used to feed adult breeders throughout the laying cycle.
Automatic chain feeders are an option for hard-pressed producers. They are claimed as the ideal choice for the provision of consistent and efficient feeding of pullets and broilers and breeder birds. Essential parts of the system are the feeder, drive unit, trough and the corners and feed chain. The system, according to manufacturers, allows feed to be pushed around the complete circuit in the house in just few minutes so that birds are provided with equal access to the same feed formulations. Uniform distribution of feed thus achieved eliminates selective feeding and results in healthier birds, greater uniformity of bird size and considerable monetary saving due to reduced wastage of feed. Systems are equipped with electrical time switches for programmed feeding (controlled or ad libitum) and exclusion grills.
Most feeding systems developed for domestic fowl use definite feeding points to which the birds are attracted. On the other hand, the spin-feeder is an automatic system that mimics the age-old method of scattering feed and grain to free range birds and in this sense brings intensively raised birds closest to the inherent feeding habits of their wild ancestors. Feed is evenly distributed over a widespread area, and the accurate feeding levels achieved means that most birds achieve point-of-lay on schedule. By using spin feeders poultry farmers can ensure that birds will have uniform access to feed, and will therefore grow at a uniform rate. The ‘instantaneous’ aspect of this mode of feeding decreases the incidence of 'flocking', while the widespread distribution of the feed eliminates competition.
Use of spin feeders (free standing or roof-mounted) provides cost-effective and automatic stress-free feeding because each dispenser is able to cater for a large number of birds. The pattern of feed spread can be manipulated according to the dimensions of the poultry house. Spin feeding is claimed to be economical on labour and user-friendly. Custom-designed and properly installed feeders, for the continuous provision of fresh poultry feed, are of little merit if the feed formulation used is not of the highest quality in the first place. This can be ensured by keeping feed in proper storage facilities which comply with standard hygiene recommendations. Feed will be protected from contamination by birds, vermin and moisture, and from sunlight which may cause physical and nutritional degradation of the feed formulation through photo-oxidation.

Furnishing feed
The design and density of feeders deployed in the poultry house should aim to:
•    Provide all birds with the same level and quality of feed so that there is uniform development, feed conversion and weight gain across the whole flock
•    Be suitable at that time for the age, size and type of birds and be easily adapted according to changing requirements.
•    Proffer and provide feed within a minimum stress situation
•    Prevent contamination of feed with feathers and faeces and spoilage through wetting
•    Be presented to and taken by birds with minimum spillage to avoid wastage and health hazard

Ways with water
Water is one of the most vital nutrients for birds. As such, importance of the continuity of supply of clean water in a way that allows all birds from chick stage onwards to imbibe freely cannot be over-emphasised. Selection and deployment of drinkers should meet the following requirements:
•    Allow for daily checking and cleaning to ensure all are always functioning at the correct height for the type and age of birds being served
•    Be deployed at a sufficiently high density to allow all birds to drink at the same time
•    Are immediately accessible for chicks on the move whether accompanied by a broody hen or raised with artificial heat
•    Provide sufficient watering to encourage drinking by chicks in their learning phase
•    Ensure all drinkers are cleaned daily to remove any blockage by litter and feed
•    Make sure water founts are cleaned daily and replenished with cool clean water
•    For caged birds check nipples and cups of V troughs daily for water flow
•    Accommodate social drinking habits in floor layers. For instance birds in large groups will establish their own individual point for drinking. If this dries up and birds are forced to use other sources the stress incurred may be sufficient to disrupt the laying cycle

Poultry Drinkers
Pure, clean and cool water is the most simple and basic yet one of the most vital nutrients.  As such the design and deployment of drinkers should follow in the same pattern with emphasis on simplicity and care. Ever since poultry was domesticated, producers have adopted sophisticated methods like ‘open water’ systems and standard round bell type hanging drinkers.
The introduction and use of nipple drinkers into floor housing systems are generally accepted as they have the biggest impact on the reduction in spreading of diseases (especially respiratory disease). Cup and nipple drinkers are being used for caged birds for nearly five decades. Their use in broiler flocks was first adopted in the United States and later elsewhere so that the modern floor-housed flocks around benefit from improved health and performance and reduced secondary infection.
But switching to nipple/cup drinkers was not all ‘plain sailing’. Researchers and producers were concerned that nipple drinkers might leak, causing wet patches on the litter and that they might not provide adequate water supply to maintain good growth rates, especially during periods of hot weather. Both concerns were subsequently discovered to be unfounded.
Research conducted in the Netherlands examined five different commercially available drinkers: round hanging bell type; low-pressure nipples; high-pressure nipples; drinker cups and nipple plus drinker cup. Results showed a higher bacterial load for open watering systems and even bigger differences for faecal contamination as measured by Enterobacteriaceae (e.g. E. coli) counts. Overall litter integrity was better and the lesser growth of pathogenic organisms improved broiler carcass quality gradings with less breast blisters and hockburns. Ammonia emissions were reduced thereby lowering the birds’ susceptibility to respiratory infections as well as reducing the severity of ascites.
This is not to say that nipple drinking-systems are free of infection. Indeed the total bacterial load of such systems can be relatively high with bacteria on the surface of the nipple and the danger of water lines becoming blocked by the growth of slime-producing bacteria like Pseudomonads. This problem is overcome by regular disinfection and flushing through with appropriate cleansing agents.
Over the years worries about nipple systems failing to provide adequate water, particularly at times of potential heat stress, have been overcome by a range of innovations. High-pressure nipples that produce a permanent hanging drop of water to encourage the birds to drink are now the norm.
Development of a nipple with a flat button like disc at its tip, so that it would retain a larger drop of water opened new dimensions within this field of thinking. A droplet of water is formed on the disc where the birds can see it and tip the disc to drink. The slightly tilted disc allows water to flow from the drinker ball valve to refill the disc with water, which is held there thus eliminating any spillage. The stainless steel disc reflects light which in turn attracts birds to drink. Moreover, it stays clean to maintain good hygiene.
Innovations in a similar vein include nipples with a pin that flares out at the base allowing more water remain on the pin. Birds therefore have access to a larger drop instead of having to return to the pin several times to satisfy their thirst. Benefits of combined nipple/ drip cup drinking systems include easier access to the nipple, allowing day-old chicks to drink directly and an added safeguard against water seepage onto the litter.