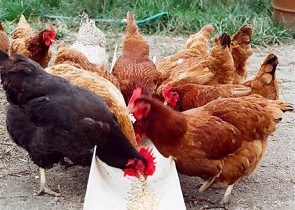 Some poultry farmers, and especially those that operate an essentially closed family-run operations, with minimal on and off farm movements, may be ‘lucky’ to have relatively few disease problems. Others may have diseases in their birds but unaware of its presence. Consequently, the presence of sick and ‘unthrifty’ hens becomes an accepted ‘norm’.

For farmers in such situations a problem of ignorance, made worse due to on-going disease problems, continues to persist. Such diseases often do not get diagnosed by a properly qualified professional, either because of limited availability of such service or due to their services being too expensive.

Other farmers may be aware of diseases in their flocks but are unable to access vaccines, or are frustrated in their attempts to purchase them, because the appropriate vaccine only comes in multiple (500 to 1,000) dose vials suitable for large producers.

The irony is that virtually all mainstream poultry diseases seen in birds could have been prevented through the relevant vaccination at the appropriate age and stage in the bird’s life. Poultry diseases cause widespread and heavy losses in production and profit by impacting on yield and quality of meat and eggs. Vaccination is invariably a very worthwhile and indeed critically important investment.

The decision on whether or not to vaccinate against infectious diseases largely comes down to an assessment by the poultry producer on the likelihood of his or her birds becoming exposed to the causal microbial pathogens.

A completely ‘closed’ flock where new birds are never introduced and the birds never leave the farm may ‘get away’ without vaccination, although disease can still be introduced by wild birds, rodents and contaminated feed and water. However, this kind of completely ‘closed’ flock situation is relatively rare and all producers are advised to vaccinate the bird especially if the owner buys birds from hatcheries, bird auctions or any other sources and introduces and them into his/her existing flocks.

Poultry vaccines are generally produced in large doses per vial and especially for the convenience of commercial producers who may have tens of thousands of birds requiring vaccination at the same time. This means the small producer may have to search further afield for a supplier who is prepared to sell vaccines in relatively small quantities. However, any extra hassle in accessing vaccines should in no way deter or discourage the small poultry producer from administering vaccine to his or her birds. Some vaccines such as Marek’s vaccine are best given at the hatchery and this may be the best source of vaccine and therefore the first port of call.

Once the decision has been made to vaccinate on farm, the owner should aim and plan to vaccinate the entire flock at one time and be meticulous in following the label directions on the vaccine being used to ensure best protection and complete safety for the flock.