As animal feed is sold with a declaration about its contents, those substances of contents are continually examined for quality assurance, said Fritsch GmbH 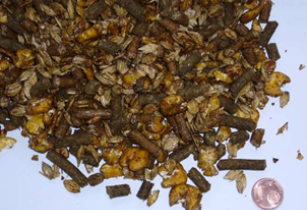 Modern analysers are characterised by the reduced use of chemicals and optimised timing. (Image source: Fritsch GmbH)

When screening this concrete task, cereal for horses is to be analysed. Especially critical and subject to errors can be the content of crude fibres. With an ultra-modern instrument by Gerhardt, this analysis is performed. Modern analysers are characterised by the reduced use of chemicals and optimised timing.

Approximately one gram of the weighted sample of the ‘to be analysed’ material is to be added to the analytical instrument. The batch size is so large that at least a mixed sample of one kg cereal has to be comminuted. When viewing the single components in the photo, then the sorted out pellet weighs 0.7 gram, the yellow chunk 0.3 gram and the husk almost nothing.

Crude fibres are concentrated especially in the husks. Therefore, with insufficient comminution faulty analyses are bound to happen. The mistakes can’t be ascribed to the analysis instrument but rather to the inhomogeneous sample. An increase of the net weight is in opposition to the use of chemicals of acid and leach and the necessary times for the cooking process. Important is hence the production of a homogenous sample with the aid of the suitable laboratory mill.

For the one-step-comminution with only one instrument, various tests were conducted with the Variable-Speed Rotor Mill PULVERISETTE 14 classic line. It became clear, that as the finest sieve, the 0.5 mm sieve may be utilised, but the obtained fineness is not sufficient. Here clearly elongated remainders of the husks can be discerned. The solution is, therefore, two-step comminution.

For the pre-comminution of larger amounts of cereal, we recommend a cutting mill. In consideration of the good cleaning possibilities for the contamination-free preparation, the Universal Cutting Mill PULVERISETTE 19 is selected. For the second step and therefore the fine comminution of a smaller mixed sample, the Variable-Speed Rotor Mill PULVERISETTE 14 is utilised. The investment in only one mill, with a greater expenditure of time, even larger sample amounts can be pre-comminuted in batches with a two mm sieve with a PULVERISETTE 14 classic line. The following tests were conducted in this manner:

For the creation of a smaller mixed sample, for the second step of the comminution, by all means, a sufficient mixing and exact sample division are to be kept in mind. For the division of the sample, the company recommend the Rotary Cone Sample Divider LABORETTE 27.

Provided, that the Universal Cutting Mill PULVERISETTE 19 is available, or larger numbers of samples are constantly processed, it is by all means recommended, that the larger amount is pre-comminuted with the cutting mill and after sample division, the obtained smaller amount is finely comminuted with the Variable-Speed Rotor Mill PULVERISETTE 14 classic line.