Food gets to play a role in Amazon activism, says GODAN executive director 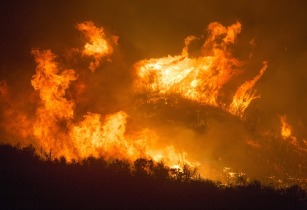 Andre Laperrière, executive director of Global Open Data for Agriculture and Nutrition (GODAN), has highlighted the issues that why the Amazon fires are a global responsibility and how the food gets to play a big role

“The widespread devastation caused by the Amazon fires requires not just our sympathies but our immediate reflection on how we have been responsible towards creating a crisis in the region - both via climate change and the human demand for increased food production. It is a fact that we have pushed farmers into de-foresting the Amazon for meeting the demand for agriculture and animal farming.”

“Brazil currently ranks second on the global stage for beef and soy production, meaning that there are significant production levels that need to be met to sate the world’s demands. This has directly put pressure on farmers in the region to scale their output and have pushed them towards expanding their farmland to more fertile soil in the Amazon as their current farmland is rendered unproductive under increased fertiliser exposures.”

“This approach to agriculture is crippling Amazon’s ecosystems. Protected habitats are being destroyed to make way for monocultural farming such as sugarcane and rice, which in turn continue to wipe out mass levels of wildlife that depend on a diversity of plant life for year-round survival. These habitats are incredibly fragile and will not be able to recover from the environmental impact that agricultural practices have on the land they inhabit.”

“Given the scale of agriculture activity in Brazil and the direct demand from countries and people from around the world for their produce, it makes us direct stakeholders reasonable for fuelling this crisis. It is imperative that we realise not only the direct carbon footprint of all our food consumed but also the indirect consequences for our choices. Adopting a conscious lifestyle, focusing on local produce, and understanding the impact of each of our choices will go a long way in saving the planet than words of sympathies to the burning rainforest.”

“The world governments have an obligation for assisting Brazil to deal with the crisis as the Amazon equates to the lungs of the planet, making it a shared responsibility. Pushing for legislative changes on trade for imports to meet forest safety standards and certification, would also force farmers in the region to change their practices to remain sustainable. Considering the levels of global demand for Brazilian produce, such an international legislative approach will help initiate direct action.”

“Finally, the scientific (and tech) community should work with the agricultural community in Brazil to demonstrate the scope of increasing productivity in their existing farms through optimised precision farming practices, then expanding their low productivity farmland into forests, which is, unfortunately, the case in the Amazon.: