Andre Laperrière, executive director of Global Open Data for Agriculture and Nutrition (GODAN), has highlighted the importance to adopt new technologies for efficient as well as environmentally-friendly farming practices 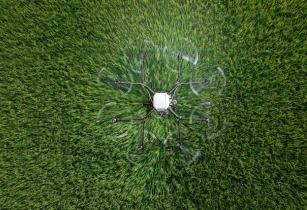 With the ability to use technology such as AI and drones, farmers are growing increasingly efficient with new ways of maximising crop production. (Image source: DJI-Agras/Pixabay)

Laperrière’s comments come after the National Farmers' Union made it clear that it wants there to be a target of net-zero emissions in British farming by 2040.

“The farming and agricultural industry is at the forefront for tackling climate change and has a responsibility to do so, due to how easily influenced it can be by factors such as changes in temperature and rainfall. Today, agriculture accounts for approximately nine per cent of greenhouse gas emissions in the UK and it is therefore important that the industry changes the way it goes about its business in order to secure a more sustainable future.”

The National Farmers' Union has made it clear that it wants there to be a target of net-zero emissions in British farming by 2040 and one way of doing this is by adapting and using modern technology in their practices. With the ability to use technology such as AI and drones, farmers are growing increasingly efficient with new ways of maximising crop production, without the need to use tractors and other large vehicles which inject a lot of harmful chemicals into our fields and atmosphere, referred Laperrière.

“From this, farming can become a more efficient industry which uses environmentally-friendly methods which not only makes the land in which we leave much better for us, but the crops and livestock needed to supply food will also become healthier as they grow in a more hospitable environment,” Laperrière added.

“With two-thirds of the food eaten by the UK produced domestically, the need to ensure that British farming is flourishing through technology and better practices is more important than ever as we look to curb global warming as much as possible. The industry needs to cater for a growing population with changing diets and this is not possible if it is to carry on as it is and technology is the key to a successful future,” Laperrière concluded.