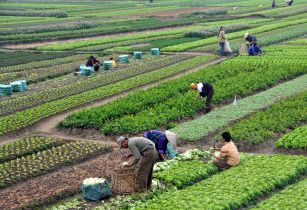 According to Vietnam’s Ministry of Agriculture, the country needs 18mn to 20mn metric tonnes of animal feed by the end of 2015. (Image source: Dennis Jarvis/Wikimedia Commons)

According to Vingroup, VinEco will grow organic fruits and vegetables that comply with VietGAP and GlobalGAP farming standards for food safety.

Steel production and real estate developer Hoa Phat Group also said the firm’s long-term strategic investments would focus on agriculture in Vietnam. The firm will invest US$14.1mn in establishing an animal feed plant with a capacity of 300,000 metric tonnes a year in Hung Yen Province.

Doan Nguyen Duc, chairman of Hoang Anh Gia Lai, which previously concentrated on real estate, said that the company turned to agriculture and had set up rubber, sugarcane, palm oil and maize plantations in Laos and Cambodia in 2008 after recognising that the local real estate sector had many potential risks.

However, the business need support from Vietnamese government.

Dang Kim Son, director of Strategic Institute of Agriculture and Rural Development, said that enterprises find it hard to identify large areas for agriculture production because regulations on land compensation and taxes are unclear.

Nguyen Van Bo, former head of Vietnam Academy of Agriculture Sciences, added that the Vietnamese government should support enterprises looking to buy land so that they could afford to invest in high-tech production methods.