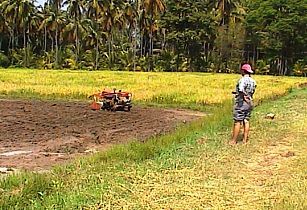 A remote-controlled power tiller has been developed by an Indian innovator, which can be used by farmers to plough their land for cultivation without physically operating it

Prajwal V Kumar has recently received the National Award for Commercialisable Patent 2013-14 by the Technology Information, Forecasting and Assessment Council (TIFAC), Department of Science and Technology, Government of India, for designing the equipment.

The tiller, which uses radio frequency for transmission of signal from the hand-held remote unit to the controller unit, was developed by Kumar as a weekend project in 2005 with an idea to make the task of farming easier. It can be used to plough the fields with the help of the remote control, which will prevent injuries resulting from thorns, stones, snake bites, etc., he said.

With the remote-controlled power tiller, one need not get on the field and the work that normally may take up to three hours can be completed in less than two, Kumar added.

Remote Controlled System for power tiller is an electronics combined mechanical gadget, which goes as an attachment for power tillers. This new technology has now achieved a big success to go for production with great demand from all over India, the innovator said.

To continue reading the rest of this article, please see the April 2014 issue of Far Eastern Agriculture