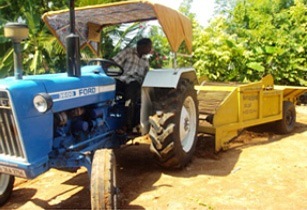 K. Viswanathan, innovator, said that Indian agriculture is traditionally, to a large extent, rain-fed and under dryland cultivation.

Priced at US$2,410, the machine can remove small stones and pebbles from the field, improves the structure and texture of the soil, increases the water holding capacity of the soil, and makes the soil easy for nursery preparation and other activities.

“The farming practices are heavily dependent on physical labour and the rising cost of cultivation and acute labour shortage for farming work had made us think of alternative practices for improving their farm productivity in a sustainable manner.”

In hilly regions, the fields are dotted with a number of small pebbles and stones that hinder farming activities such as land preparation and inter-cultural operations, he added.

P. Alagesan, programme coordinator, Myrada (Mysore Resettlement and Development Agency) KVK, said, “In dryland during monsoon season, an intense sudden downpour though for a short time leads to top soil runoff resulting in soil erosion and more number of stones getting exposed in the field.”

Talking about the tractor, he added that the stone remover requires 35 HP and above power. It consists of conveyor chains drive gearbox, PTO shaft and the bottom of the stone remover is connected with tines. Tippers are connected to the backside of the equipment.

“While operating, the conveyor chain gets rotated at the rate of 12 – 16 rotations per minute. At the same time, the diggers loosen the soils exposing the stones which are pulled into the conveyor chain and collected into a tipper,” Viswanathan said.

He said that the machine is capable of picking both small and big stones, but not boulders, from a depth of 15cm to 25cm in the soil. In a day it can used to clear five acres.