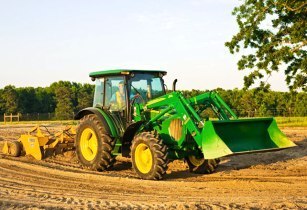 Available from January 2014, John Deere's new generation 5M Series utility tractors are suitable for a wide range of commercial and horticultural applications, from mowing to trailer and front loader work

Replacing the previous 5M Series launched in 2009, this new range consists of four higher horsepower models from 75 to 115hp, all featuring fuel-efficient, Stage III B compliant engine technology and a choice of transmission options, the company said.

• With a proven standard cab for all four models, which offer high levels of operator comfort and visibility;

• With a newly designed low-profile cab which reduces overall height to less than 2.5 metres. These versatile models are designed for use in and around low buildings, or for applications that require tractors with a low centre of gravity for transporting and hauling operations;

• With an integrated open operator station (IOOS), available on the three larger models;

• As a newly designed 5M Narrow version with an overall maximum width of 1.72m. These tractors meet the needs of horticultural and specialist producers, including fruit and hop farms.

The transmissions are available with a ground drive pto as well as in a creeper version, which can reduce the speed to 300m/hr at rated engine speed. They also feature a unique park lock as standard, which ensures that the tractor stops safely when parked on steep slopes.

As a further option, an integrated gear shift button on the joystick allows the operator to change gears using a single lever during loader work.

John Deere's exclusive mid-frame design on the 5M Series not only offers additional strength and durability but also reduces noise and vibrations.

For extra versatility the tractors can be equipped with an optional front hitch, front pto and matching H Series front loader, the H260 or H310.

Compared to previous models, these new front loaders have been redesigned to provide more accuracy and improved reach, so the full lift height can be utilised to dump material into trailers for example.

Visibility has been improved with a new hood guard, and there is an additional 12 degrees of roll-back to make filling the loader bucket more efficient, John Deere said.