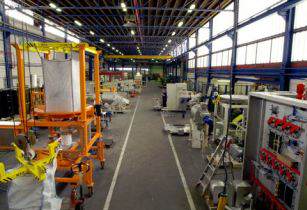 Pandora End of Line Mixing works according to the principle of continuous mixing, whereby raw materials are continually added and removed from a compact mixer. (Image source: Dinnissen)

The Pandora End of Line Mixing concept is especially suited for situations in which costs have to be carefully managed without making any concessions in terms of quality. The new concept is suitable for mixing a maximum of 10 micro components, and has a capacity of 50 kg to up to 100 tonnes per hour.

Also applied in chemical and pharmaceutical companies, Pandora End of Line Mixing works according to the principle of continuous mixing, whereby raw materials are continually added and removed from a compact mixer. The concept is based on a combination of several accurate gravimetric feeders and the Pegasus mixer. The feeders accurately measure the supply of ingredients to the Pegasus mixer, which can consist of micro-ingredients (0.01 to two per cent per batch weight) and even extremely high percentages (30-220 per cent per batch weight).

The Pegasus paddle mixer gently suspends raw materials during the mixing process in order to obtain a homogeneous result extremely quickly. The mixer can gently mix fragile products in six to eight seconds and sticky and difficult-to-mix powders and liquids within 30 to 50 seconds. The compact design of the Pegasus mixer ensures cost savings.

The compact design of the Pandora End of Line Mixing solution makes it possible to mix ingredients much more quickly, maximises production capacity, and minimizes energy consumption. The quick response time of the gravimetric feeders in combination with the special batch startup integrated into the new mixing concept minimises startup and switchover times for the production process, minimising the loss of finished product.

The compact design also makes the mixer easier and quicker to clean, which also helps minimise production downtime. The compact design of the Pandora End of Line Mixing concept also means that less space is needed to install it in a new environment or to integrate it into an existing production line.