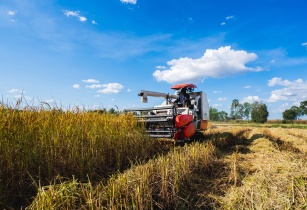 Vietnam is one of the Southeast Asian countries, which depends on agriculture as the state’s primary source of income. The agriculture sector represents 14% of the GDP and employs around 36% of the nation’s workforce, according to a World Bank study of 2020

According to the Ministry of Agriculture and Rural Development in 2020, the level of mechanisation in agriculture is increasing in the pre-and post-harvest stages. Specifically, the rate of mechanisation of agricultural land preparation reached 94%; 42% of sowing and planting care reached 77% and that of rice harvest reached 65%.

Compared to 2011, in 2019, the number of tractors across the country increased by about 48%, combine harvesters increased by 79% and agricultural dryers increased by 29%. The farm power availability reached about 2.4 HP/ha cultivated. However, Vietnam is still far behind the average level of equipment for agriculture when compared to Thailand with four HP/ha, China eight HP/ha and Korea 10 HP/ha, according to the Ministry of Industry and Trade.

Vietnam is facing an acute shortage of labour in agriculture with the population shifting to construction and other fields expecting better income. This has been a crucial factor in the increased use of machinery across various processes. The shift in occupational structure from agriculture to different sectors is mainly occurring in the four regions: The Red River Delta, the North Central and the Central Coastal areas, the Mekong River Delta, and the South East.

According to the International Rice Research Institute, the country has 70 million pieces of land; therefore there is 0.7 ha of land available for every family, which is made up of three to four pieces of land. Due to this high level of distribution inland, farmers favour smaller harvesters or two-wheel tractors which are convenient for small parcels of cultivable land and are highly efficient.

Read more on the latest issue of Far Eastern Agriculture.