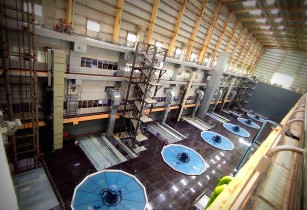 According to WEG, the Kaleshwaram lift irrigation scheme of Telangana is the world’s biggest multi-stage lift irrigation project, supplying water to the drought-prone upland regions of Telangana state. Using lifts and pumps in a complex system of reservoirs, water tunnels, pipelines and canals, the project irrigates 7284.34km of land in 13 districts and stabilises 6879.65km in seven other districts.

The Telangana state government has invested in the implementation of irrigation facilities that helps lift the water from low levels using WEG’s industrial technologies. The irrigation is achieved using perennial rivers that have very low water levels of around 200m, meaning that when water requirement reaches 800m, 400-600m of water is pumped to the rivers.

MEIL was tasked with establishing a sophisticated electromechanical system for the project within three years, meaning that WEG was required to supply the required within a short time frame. WEG suggested 22 synchronous motors, which are developed to help to lift 0.06 cu/km of water in a day while requiring 1120 megawatts (MW) of power for 28 pumps in three pump houses to lift the water.

WEG said that the motors are capable of diverting high levels of water to achieve even distribution. During periods of rainfall that result in higher water levels, the pumps driven by WEG motors is also said to be able to ensure the supply of surplus water supplied to storage areas, such as lakes, rivers and reservoirs.

Sri Balaji, deputy general manager at WEG India explained, “For the irrigation projects in India, WEG’s equipment is now used across all states. 29 to be exact. Since 2019, we have supplied around 400 motors including 14MW motors and 14 machines in a single pump house for this Kaleswaram lift scheme. In fact, WEG has several of its own manufacturing facilities in India, meaning much of the equipment was developed in India too.”

Reflecting on the wider impact of WEG’s involvement in the project, Ranjit Kumar, assistant general manager at MEIL said, “The Telangana state government wanted their land irrigated in a short time frame, with a high discharge pumping system, WEG’s India and Brazil teams were flexible with MEIL’s requirements, and the integration of the complex system was achieved in a three-year time frame, meeting the Telangana state government’s objective.”