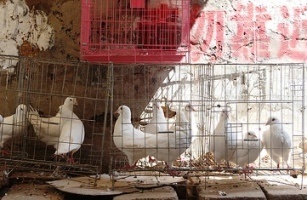 The Chinese poultry industry has been hit by a new strain of bird flu, H7N9 virus, which has already resulted in the culling of more than 20,000 birds in eastern China and surrounding areas

has closed a live poultry trading zone recently in an agricultural products market and began slaughtering all birds there after detecting H7N9 bird flu virus from samples of pigeon from the market. The health scare, which has led to the death of six, prompted authorities to slaughter 20,000 birds at the market after some pigeons tested positive for the virus.

’s Ministry of Agriculture has said that it found the H7N9 virus from pigeon samples collected at the Huhuai wholesale agricultural products market in Songjiang district of Shanghai.

After gene sequence analysis, the national avian flu reference laboratory concluded that the strain of the H7N9 virus found on pigeons was highly congenetic with those found on persons infected with H7N9 virus, the ministry said.

The municipal agricultural commission said it has ordered proper disposal of the culled birds, their excrements and contaminated food as well as disinfection of the market and vehicles that carried them and other things that have contacts with them.

The commission will also investigate and track where the pigeons came from.

Meanwhile, the agency has ordered the closure of the live poultry trading areas of two markets in Minhang district after samples there were found with H7 bird flu virus.