The Ministry of Agriculture and Rural Development of Vietnam (MARD) has announced major developments in the import of processed seafood products and Vietnamese durians, along with the opening of a wood fair in Binh Duong 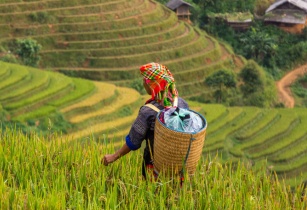 The Ministry of Agriculture and Rural Development announces major developments in the import of processed seafood products and Vietnamese durians, along with the opening of a wood exhibition in Binh Duong province

A circular issued by the ministry stated that COVID-related quarantine requirements for frozen processed seafood products that were imported for the purpose of reprocessing for export would be removed from 11 September 2022. It was further announced that the ministry would help foster the exports of agricultural products by reducing the number of product categories subject to quarantine and also make use of technology to speed up the customs process. The Vietnam Association of Seafood Exporters and Producers (VASEP) petitioned the government, demanding an amendment of quarantine regulations that were causing 'big problems' for the seafood industry.

VASEP mentioned that it went against the Government’s policy of reducing the list of goods subject to specialised inspection, current legal regulations and international practices. It also stated that it wanted quarantining removed for processed seafood products imported for domestic consumption that were assessed as not posing a risk of spreading aquatic diseases.

Dang Phuc Nguyen, general secretary of the Vietnam Fruits and Vegetables Association also revealed that China had now allowed Vietnamese durians to be imported through official channels from July 12. However, opportunities like these did come with obstacles. The Chinese General Administration of Customs (CGAC) required exporting firms and growing areas to register with the Vietnamese Ministry of Agriculture and Rural Development (MARD), following which the registrations would be sent to CGAC for approval. It was only after this that the fruit could enter the country.

The general secretary mentioned that other demanding markets such as the US and the EU insisted on Global GAP compliance and a strict chemical residue threshold for Vietnamese durian, hence resulting in the rejection of durians that did not meet these criteria. Ta Duc Minh, trade counselor of the Vietnam Trade Office in Japan, underscores Japan as a market with high standards and stringent fruit regulations. Since the detection of excessive pesticide residues in 2021, Japan has increased the frequency of inspection of Vietnamese durian, in turn making it more difficult for the fruit to reach Japanese consumers. Nguyen Phu Hoa, deputy consul general in Sydney (Australia), underscores Australia as a high-end durian market. He also called for a national trademark for Vietnamese durians to add more value to the fruit and ensure the sustainability of its exports.

"The Vietnam Trade Office in Australia will support Vietnamese firms in media promotion to strengthen their presence in the country. Australia is a potential durian importer," he added. Ngo Tuong Vy, general director of the Chanh Thu Import-Export JSC asserted that it was tough to gain entry into foreign markets and tougher to cause changes to consumer eating habits in favour of Vietnamese durians. She also remarked that China's low standards on fruit were a thing of the past as the country had now set the bar relatively high, with Vietnamese firms having no choice but to adapt to the shifting trade pattern.

Luu Huy, director of the Viet Thai Agricultural Produce Ltd suggested four rules that Vietnamese firms had to follow in order to boost durian trade with the country. Firstly, Vietnamese durians had to meet all the standards set out by Chinese trade authorities. Secondly, the fruits were required to reach a maturity rate of 80 per cent upon harvesting. Thirdly, they had to almost be identical weight-wise and quality-wise. Lastly, logistics and refrigeration systems had to come up to scratch. At the conference on China's higher bar on Vietnamese fruits recently, deputy director of the

MARD's Agro Processing and Market Development Authority Le Thanh Hoa said that many markets were tightening up on Vietnamese fruits with stricter food safety and phytosanitation standards. Vu Duc Con, deputy director of the Đak Lak province's Department of Agriculture and Rural Development, revealed that the department had established 24 packaging facilities and 38 growing areas and had sent the list to CGAC for approval.

Apart from these developments in food import, the Binh Duong province has also seen the opening of a wood fair with more than 100 Vietnamese and foreign firms showcasing advanced wood processing technologies, machinery and raw materials at the 2022 Vietnam Binh Duong Furniture Association (BIFA) wood exhibition which opened on August 8. The biennial trade show is expected to unlock possibilities for local and foreign companies looking to tap into Vietnam’s potential.

Vice-chairman of the province People's Committee, Nguyen Van Danh, said Binh Duong’s exports in the first six months topped US$19bn, with its wood industry’s exports being worth over US$6bn. Seminars on automation in the wood industry, and wood materials from the US and Europe would be held during the trade show, with visitors also having the chance to visit the most modern wood factories in the province. All in all, it is expected to create a forum for domestic and foreign enterprises to network and establish long-term co-operation to foster the development of Vietnam’s timber sector.