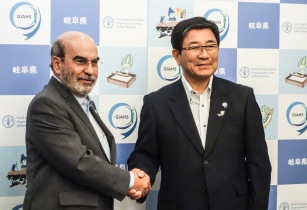 Japan has a very unique food culture that can greatly contribute to improvements in global nutrition, FAO Director-General José Graziano da Silva said today during his visit to the country

"Japan is a global model for healthy diets," he said. "Japan currently has the lowest rate of obesity among developed countries. You are below four percent."

Graziano da Silva noted how Japan has a healthy and "unique" food culture, one that includes many vegetables, fruits and fish.

He cited Washoku, a comprehensive set of skills, knowledge and traditions relating to the preparation and consumption of food, which has been designated as an Intangible Cultural Heritage by UNESCO. Washoku is based on a "respect for nature" and is composed of fresh, seasonally available, low-fat ingredients, which together represent a well-balanced diet.

The FAO Director-General made the remarks during a visit to Tokyo's Sophia University. He noted that Japan has a wealth of knowledge and experience to share with other countries - an interaction FAO is keen to promote as an activity related to the United Nations Decade on Nutrition.

The Decade aims to address poor dietary habits, which have been closely linked to non-communicable diseases  - including heart attacks strokes, cancers and diabetes -  a leading cause of premature death, not only in high-income countries, but also increasingly in many parts of the developing world. These diets are typically not only unhealthy, but environmentally unsustainable.

In this context, Japan exemplifies how effective public policies and legislation can promote adequate nutrition, especially through laws aimed at educating children and controlling adults' weight, the FAO Director-General said.

Such measures, are in line with commitments made by world leaders at the 2014 Second International Conference on Nutrition and the 2030 Agenda for Sustainable Development, to establish national policies aimed at eradicating malnutrition and transforming food systems to make nutritious diets available to all.