Start-up company Crover has introduced the world-first agricultural technology, designed to reduce waste and save millions of tonnes of grain stock each year 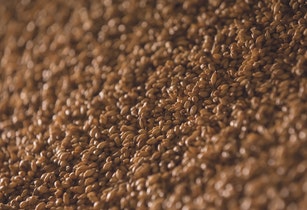 Crover has been developing the robot that can take accurate temperature and moisture measurements as it travels through the grain. (Image source: 42 North/Pexels)

The company has developed a robot that can ‘swim’ through cereals and grains to monitor their condition while they are still in storage. This is a first-of-its-kind robotic grain monitoring solution and enables a greater understanding of the condition of stored grains.

Managed by the Science and Technology Facilities Council (STFC), part of UK Research and Innovation, in collaboration with ESA, and partly funded by STFC, the University of Leicester and the UK Space Agency, the ESA BIC UK programme helps businesses boost their competitiveness in an increasingly fierce and global marketplace.

Based at STFC’s Higgs Centre for Innovation at the Royal Observatory in Edinburgh, Crover has been developing the robot that can take accurate temperature and moisture measurements as it travels through the grain. This data is then transmitted, via satellite communication, to the grain store manager. Through the ESA BIC UK programme, Crover has also gained access to the advanced 3D printing expertise and capabilities, enabling them to identify and develop the bespoke components required for their design.

The company said that this technology was also put to the test at the TechCrunch Start-up Battlefield 2020.

Dr Lorenzo Conti, the founder of Crover, said, “The opportunity to work alongside astronomers, engineers, as well as 3D printing and prototyping experts has been invaluable to our business and our mission to invent something that could help change the world for the better.”