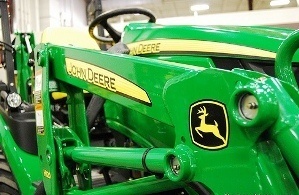 These new 2014 models have integrated the latest technology to provide the utmost performance for row-crop tractors in this class.

The new 8R/8RT Series Tractors feature a CommandARM and a Generation 4 CommandCenter with 10-inch display, along with other cab improvements that enhance operator comfort and convenience. Additional new options include LED lights, larger wheels/tires, and increased hydraulic capabilities.

Starting with the PowerTech PSS 9.0L SCR engines that meet Final Tier 4 emissions regulations with outstanding fluid economy, the new 8R/8RT Tractors have been engineered to provide uncompromised performance in the field.

McGinnis added, “We’ve increased the engine horsepower ratings of all the new 8R models and boosted the max hydraulic flow capacity by 41 per cent to 85 gallons per minute. This 8R option allows customers to operate at reduced engine speed while handling larger implements such as planters that require high, constant flow rates.

The 8R Tractors will be available with either 16-speed Power Shift or an IVT transmission. The 8345R, 8370R and all three track models will feature the IVT as standard equipment. In addition, Group 49 rear tires will be available on all wheel models.

Another important new feature that customers will see on the new 8R/8RT Tractors with a completely redesigned CommandARM with improved ergonomics and integration of intuitive controls for the major tractor functions such as AutoTrac resume, throttle, transmission, SCVs, PTO and hitch.